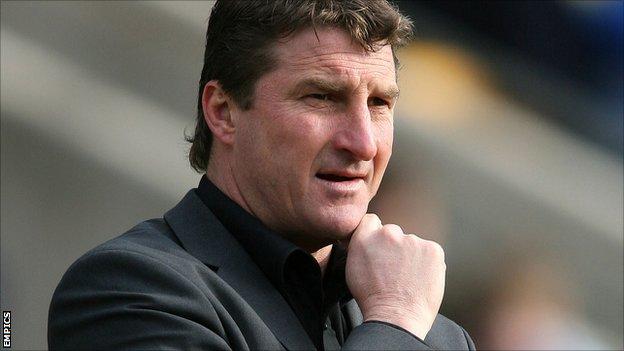 Warrington head coach Tony Smith has signed a contract extension tying him to the club until 2015.

The 45-year-old has led the Wolves to three Challenge Cup wins in four years since taking charge.

The Super League Grand Final trophy eluded them, however, when they lost to Leeds Rhinos earlier this month.

"I'm excited about our future and I'm pleased with the progress we've made in the time I've been here," Smith told the club website.

"Working with the people I get to work with in these exciting times for the club and being part of it as we try to establish ourselves as one of the big teams in the competition excites me.

In everything he does, on the field and off the field, he's the true professional

"I have a lot of respect for the people I'm working with and working for, so it was an easy decision to make."

After ending his playing career at Workington, Australian-born Smith, now a British citizen, moved into coaching with Huddersfield Giants in 2001.

He later moved on to Leeds, guiding them to the Super League title in 2007 before taking charge of England side at the 2008 World Cup.

Smith was appointed head coach by Warrington in March 2009, initially combining the job with his England role before giving up the latter eight months later, and as well as their Challenge Cup successes, the Wire also won the League Leaders' Shield in 2011.

Chief executive Andy Gatcliffe told BBC Radio Merseyside: "Tony gives players strength of mind with the way he handles them. The respect they have for him is second to nobody.

"Once you've got that bond between the head coach, the senior players and junior players, you get the results that come out of that. He commands that respect.

"In everything he does, on the field and off the field, he's the true professional."