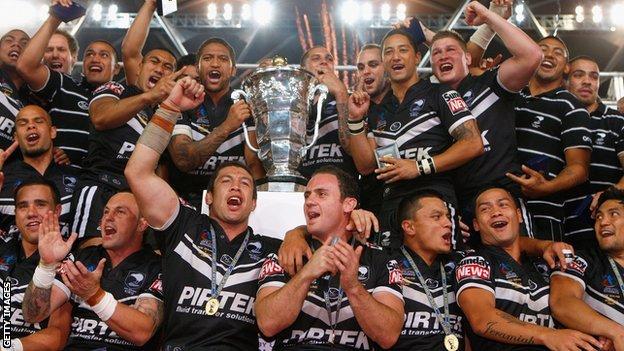 The 2013 Rugby League World Cup gets under way in a year's time with New Zealand attempting to defend the title they won in 2008.

But the Kiwis face strong competition from Australia and England in the 14-team tournament, which climaxes with the final at Old Trafford on 30 November.

BBC Sport looks at how the three big guns have fared over the last 12 months and predicts which team and players will make an impact in 2013.

Won last year's Four Nations in Britain with an easy victory over England in the final to cement their position as the best team in the world. This year, the Kangaroos have beaten New Zealand twice in one-off tests in April (20-12) and October (18-10) and have strengthened their already formidable squad with New Zealand-born front-rower James Tamou, who scored a try and was named his team's player of the match in the recent win over the Kiwis. 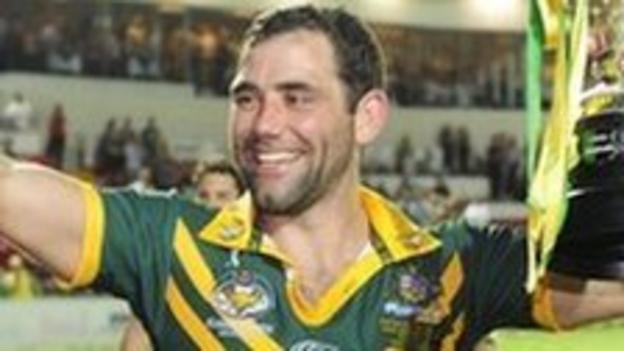 Hooker Cameron Smith has enjoyed a stellar year at international, representative and club level. He has already been rewarded for his efforts by being named the Rugby League International Federation Player of the Year.

Earlier this year, he was named as Australia captain following the retirement of the legendary Darren Lockyer and skippered the Kangaroos in their two victories over New Zealand.

Smith also guided Queensland to a record-breaking seventh consecutive State of Origin triumph and also led the Melbourne Storm to the NRL Premiership title, becoming only the third man after Lockyer to captain three successful sides in one season.

"Australia are definitely the favourites for the World Cup. I've watched one or two NRL games each week all year and the competition gets stronger and stronger. They also play State of Origin, which has an intensity unlike anything else. The Aussies have a strong spine of Cameron Smith, Johnathan Thurston and Billy Slater, who have been together for such a long time. If you throw in the likes of Cooper Cronk, Paul Gallen and James Tamou, we will see some fearsome and awesome players."

World Cup history: Winners for the first time in 2008.

They only managed one win in last year's Four Nations, losing to both Australia and England but beating minnows Wales. Their record in one-off games is poor and lost both games to Australia in their two meetings this year. The Kiwis were in control for much of the second game but were unable to capitalise on their chances and it was the Kangaroos who pounced late on through Darius Boyd to seal the 18-10 victory. 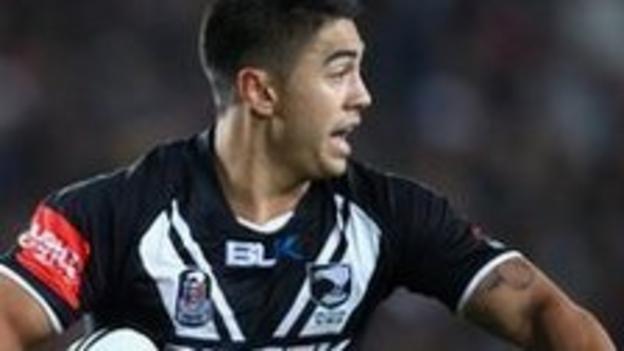 Half-back Shaun Johnson will be hoping to make a big impact in what will be his first major international tournament as the Kiwis bid to retain the title they famously won in Australia in 2008.

He helped the New Zealand Warriors reach the 2011 NRL Grand Final after only making his debut in June but missed last year's Four Nations through injury. He made his Test debut in April against Australia with Kieran Foran out through injury and marked his debut with an 80-metre interception try.

Although the Warriors struggled at times this year, finishing 14th, Johnson was the club's equal try scorer and led the team's statistics for most try assists (17) as well as line breaks (13).

He was omitted from the Kiwis team for the recent Test but still won the RLIF Rookie of the Year award.

"New Zealand are the perennial entertainers and they seem to peak for the big competitions as we saw in the last World Cup and in the 2010 Four Nations. They have Benji Marshall as their iconic leader but also considerable prowess with the likes of Kevin Locke at full-back, hooker Issac Luke and half-back Shaun Johnson. They are always very committed and very together at big tournaments and you would be a fool to back against them retaining their title next year."

After losing heavily to Australia in last year's Four Nations final, England coach Steve McNamara described it as a missed opportunity but was keen to focus on the positives ahead of the World Cup. Since then, the squad have had regular get-togethers and played two matches against the Exiles in June and July, winning one and losing one. Captain Jamie Peacock retired from the international game in June, to be replaced by his Leeds Rhinos colleague Kevin Sinfield for the current series against France and Wales. 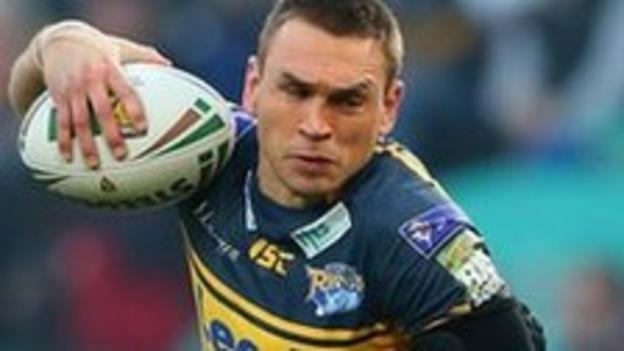 New England captain Kevin Sinfield will hope to bring his magnificent form for the Leeds Rhinos into the international set-up. The 32-year-old earned plaudits from across the sporting world after he led the Rhinos to a sixth Super League Grand Final title, winning his second Harry Sunderland award for his man-of-the-match display.

He was appointed Leeds captain in December 2002 and set a club record in 2008 by scoring in 63 consecutive matches. This year, he scored his 3,000th point for the Yorkshire side.

The man known affectionately as "Sir Kev" made his England debut in 2000 and played in both the 2000 and 2008 World Cups. He will be hoping to make it third time lucky on home soil next year.

"Although they are still third favourites with the bookmakers, England are in a really good position with a year to go. Thanks to the work that Steve McNamara has done, I think they are the strongest they have been for 10 years. Players like Sam Burgess, James Graham and Gareth Ellis have benefited from playing in the NRL, while there is plenty of English talent in the Super League with players like Ben Westwood, James Roby, Sam Tomkins and Gareth Hock. There is definitely reason to be optimistic. On their day, England can beat both Australia and New Zealand."