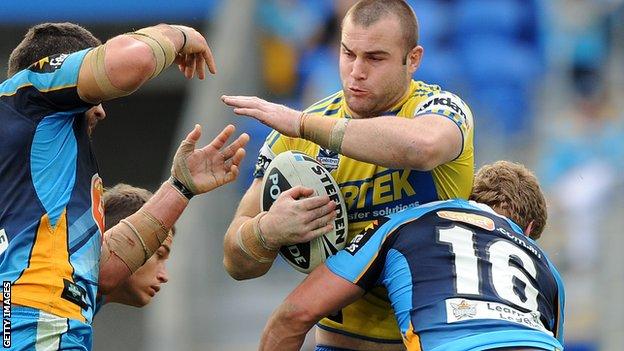 The 27-year-old, who played in the 2009 State of Origin game for New South Wales, will move to Yorkshire after a three-year spell with Parramatta Eels.

"I've had almost 10 years in the NRL and I wanted a different challenge.

"I've always wanted to experience playing in England and Wakefield really appealed to me because it is a very family orientated club," he said.

A former Australian schoolboy international, Poore weighs in at 17st and Wildcats chief executive James Elston hailed the deal as a "major signing" for the club, who reached the Super League play-offs last season before losing to eventual winners Leeds Rhinos.

"There was an NRL club after his services but he has chosen to come to Wakefield and I think that's an acknowledgement for the work that has been done, particularly by (coach) Richard Agar in creating an environment where players want to come and play for Wakefield," Elston told the club website.

Poore is the third signing made by the club since the end of the season, following the arrival of Bradford half-back Paul Sykes and Hull FC utility back Reece Lyne.

"I probably didn't think I'd be coming over at this stage in my career but when the opportunity came around I jumped at it because it's a short career and you never know when it might come around again," he said.

"The NRL is very controlled and there's a lot of emphasis on defensive structures, but the Super League does seem a lot more open and that was tempting to come and be a part of.

"But I'd probably say the decisive factor for me was Richard Agar. Some coaches can be very ruthless with how they speak to players but the way he spoke to me he convinced me to come to Wakefield," Poore added.

He is only the 12th State of Origin player to join Wakfield, and the first since 2005.