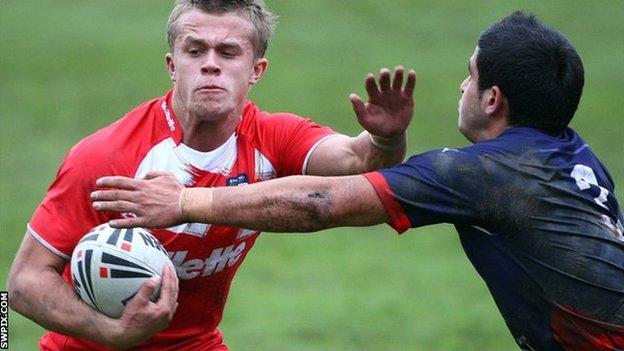 The 18-year-old full-back has signed a two-year deal with the Super League club, for whom Robinson was a star of their dominant side during the 1990s.

Burgess, Hampshire, Williams and Tierney all represented the England Academy in Australia during the summer.

Tierney has a long way to go match the achievements of his father, 38, who is one of the few English players to have represented his country in both rugby codes.

Beginning his career in rugby league, Robinson made more than 300 appearances for Wigan, winning the man-of-the-match award in the first Super League Grand Final in 1998.

Following a switch to rugby union side Sale in 2000, Robinson made his international debut for England in February 2001 and for the British and Irish Lions later that year.

He scored a try in the 2003 World Cup final against Australia, as England lifted the trophy for the first time, and also had a brief spell as captain of the national side.

Tierney will be hoping to emulate his father by appearing for Wigan's first team and it is likely he will be given the chance to force his way into Shaun Wane's squad at the start of next season.

The Warriors, who won the League Leaders' Shield in 2012 and were semi-finalists in both the Challenge Cup and the Super League play-offs, have already recruited and from Hull KR ahead of the 2013 campaign.