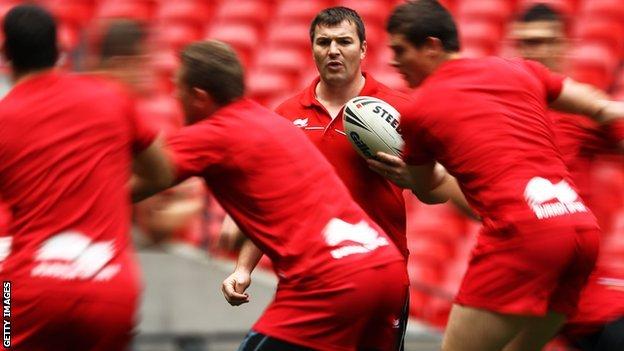 Wales have set themselves an ambitious four-year target to become one of rugby league's super powers.

The Welsh have risen from 15th to sixth in the world under coach Iestyn Harris's three years in charge and face England in Wrexham on Saturday.

England are third in the rankings, behind Australia and world champions New Zealand, and provide a test for Wales's 2013 World Cup preparations.

"England are a lot further advanced than we are," said Harris.

"But we have aspirations to get there."

England have just returned from a 10-day high-altitude training camp in South Africa but Harris insists there is no envy on his part as he attempts to turn his largely part-time squad into world-beaters.

"We have created our own centre of excellence," said former Great Britain star Harris.

"We've our own pitch and our own gym - where we are carrying out base-line tests to find out where our players are in preparation for next year's World Cup.

Harris's side were beaten by France in the first game of the autumn international series and the Welsh, semi-finalists at the 1995 and 2000 World Cups, need a drastic improvement to defeat England and keep their hopes alive of reaching the 11 November final.

"We need to improve a couple of areas where we didn't quite get it right," Harris said.

"The desire from the players was magnificent but we didn't channel it in the right direction and we lacked patience in our defence.

"We only had six or seven days prior to the competition to work with the players and a lot of them are semi-professional so we've got to bring them up to speed as quickly as possible.

"It's an important week for them. We're striving to get consistency at this level of intensity."