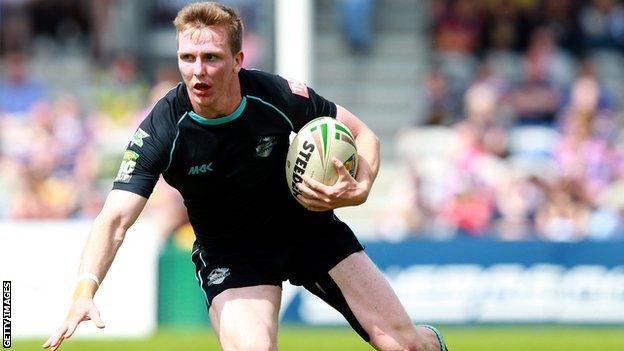 England Knights lifted the Alitalia European Cup after maintaining their 100 per cent record against Scotland.

Jordan Turner and Keiran Dixon also went over for Knights.

Knights coach Keiron Purtill, whose side beat Ireland 56-4 last week, said after the match at Meggetland: "It's great to get the first bit of silverware on board for this group.

"There were some very good performances out there today and it was pleasing to top that off with a trophy.

"It's the first trophy I've won as a coach and the first for the Knights as a group and you could see that a lot of the lads out there really enjoyed that experience.

"They've put a bit of pressure on the next group of Knights coming through - we talk about setting the standard for the next groups to follow and they've certainly raised the bar.

"We were unfortunate during the week to lose Shaun Lunt and Luke Gale to injury and Michael Lawrence to illness and that probably disjointed us a little in our preparation but the lads pulled through together and showed great spirit.

"A special mention goes to Ben Currie, who came on board late and showed the right attitude and the right spirit to be involved and that's been a key factor in this group."