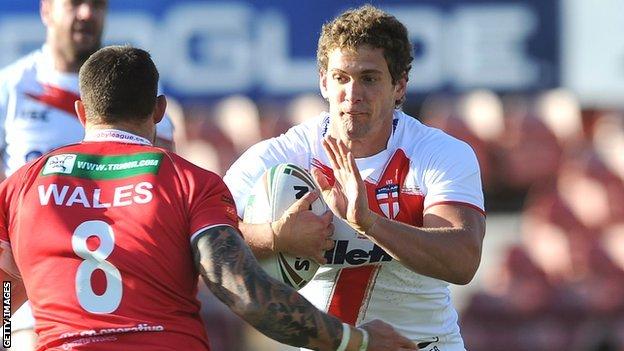 Sean O'Loughlin has been ruled out of England's autumn international series match against France on Saturday.

The Wigan loose forward has failed to recover from the hamstring strain he suffered in last Saturday's opening 80-12 victory over Wales in Wrexham.

The 29-year-old will undergo extensive treatment in a bid to be fit for the final against France on 11 November.

"We monitored his injury at the weekend and will continue do so this week," said England coach Steve McNamara.

"The main aim now is trying to get him fit for the final in a fortnight's time.

"The injury to Sean means someone else will be given a chance to shine. We have a number of options and some of the players who missed out against Wales will now be considered.

"We have the quality of Liam Farrell, Luke Burgess and Ben Harrison who all sat on the sidelines against Wales. I can add them to my options.

"There is a healthy drive for competition within the squad and every player wants to play.

"It is a good position to be in and will give me some food for thought when I select my side for France later in the week."

McNamara had already hinted he may make some changes to his side for the match in Hull to give games to those members of his squad who did not feature against Wales.

This could well make Farrell, who was one of seven members of McNamara's 24-man squad unused on Saturday, favourite to replace his Wigan team-mate O'Loughlin at Craven Park.

The 22-year-old was a late call-up following the withdrawal of Warrington second rower Ben Westwood but featured for England in the 32-20 defeat by the Exiles this summer.

McNamara, who gave seven players their first caps in Wrexham, said: "We don't get too many games to experiment. We may make changes."

"We've got some very good players who didn't play against Wales, but it's a two-match series now against France," he added.

"I'm sure they've got some motivation to come and play England after we've not played them for a while."

With four tries on his debut, Josh Charnley looks to have done enough to keep his place so Ryan Hall may make way for the return of Tom Briscoe, with McNamara admitting there is little to choose between the wingers.

"It's virtually a toss of a coin to decide who plays those positions," he said. "Josh has been in tremendous form for his club and got the nod this time."

Tomkins missed the end of the Super League season, as well as Saturday's opening international, with a knee injury while Chase picked up a groin injury on England's training camp in South Africa and Ratchford was not considered for the Wales game because of illness.

Chase was initially ruled out of the tournament but a second scan showed the injury was not as serious as first feared and he reported back to the England camp in Loughborough today.

Warrington's Richie Myler profited from the absence of Chase and he is hoping to get the nod to continue in the number seven jersey against the French.

"Hopefully, fingers crossed," Myler said. "I was part of a good side. They played well around me and helped my game.

"If I'm selected again this week, I'll be over the moon and I'll give my best again.

"We've got two more games, it's like a mini Test series against France, and everyone wants to be involved."

One man hoping to keep his place is veteran forward Adrian Morley, who returned to the international scene to make his 51st appearance.

"I really enjoyed it," said the 35-year-old Warrington captain. "After being overlooked for the Exiles games in mid-season, it was a goal of mine to make the squad at the end of the year.

"Thankfully I got in the squad and I've loved every minute of the last two weeks building up to the game."