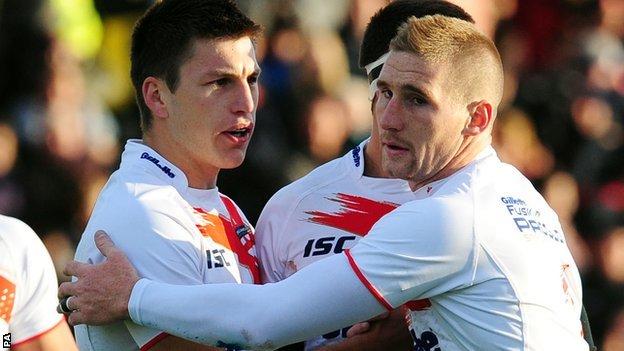 England scored eight tries in on Saturday but despite a good defensive display they were less smooth in attack at times.

"Offensively we were very scratchy compared with the fluency we showed against Wales," he told BBC Sport.

"Maybe we just got a bit carried away with ourselves at times."

Ellis must wait until Monday to discover whether he can play in the final after being placed on report for a hit on full-back Cyril Stacul that left the Frenchman needing to go to hospital for checks.

"England were very strong defensively. Whatever France threw at England, there was no challenge. They were strong physically and won the ruck which made it difficult for the French. Execution became difficult because you sometimes drop down to your opposition's level, and France made it quite scruffy for both teams in attack. The challenge is for the French to get up to speed for next week."

"I'll have to wait and see," he added. "I haven't seen the incident on video yet and I just hope for the best. I really want to be involved so fingers crossed."

But the 31-year-old, who has returned from four years with Wests Tigers in Australia to play with Hull FC next season, knows there is still work to do.

"I thought our defence was fantastic and as the game wore on, keeping France to nil was a goal but even though we didn't achieve that, I don't think it took away from our defensive efforts overall," he said.

"We still need to work really hard in certain periods but sometimes we just tried to push it and it gave France opportunities to get back in the game. I don't think we would get away with that against Australia or New Zealand.

"That is something we will have to focus on this week and it is good that it gives us something to work on and correct for the final."

Leeds centre Kallum Watkins scored a hat-trick of tries in the game at Hull KR's Craven Park while Wigan full-back Sam Tomkins, back in the side after a knee injury kept him out of last week's win, scored two tries on his 14th England appearance to beat former St Helens and Wigan winger Alf Ellaby's 77-year-old record. There were also two tries for Hull FC winger Tom Briscoe.

But Watkins said afterwards that despite his scoring feat, he is not certain of lining up in next week's decider at the Salford City Stadium.

"For me personally it will be difficult to top this week," he said. "I'm really happy but next week is a different game and we are looking forward to it.

"You can see that your spot isn't always safe and I think it will be a headache to pick a team for next week. I just want to work hard and improve."

Despite France conceding eight tries and having several injury concerns, England coach Steve McNamara believes they will be better next week.

"France have some experienced individuals," he said. "If you look at our forwards, they will face sterner tests and I think one of them will be next week."

England have spent the last month in camp, starting off with a trip to South Africa for high-altitude training and they now seem likely to wrap up their season with a trophy.

For McNamara, it is just reward for the efforts they have put in as they prepare for next year's World Cup.

"We're walking away from the ground with a warm glow around us," he said. "This is a test for us - we're having to apply ourselves at the end of a long season for a sustained period of time.