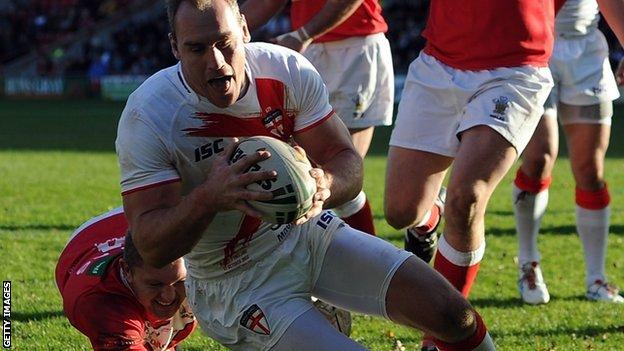 Gareth Ellis is relieved to be able to play in the Autumn International Series final after avoiding a one-game ban.

Ellis, 31, was put on report for a high challenge during England's 44-6 win over France but has been cleared to play in the final against the same opponents on Sunday.

"I've not played many games this year," said second-rower Ellis.

Ex-Leeds Rhinos player Gareth Ellis joined Australian side Wests Tigers in 2009 but will play for Hull FC in the Super League next season.

Hull FC director of rugby Shaun McRae has described Ellis's transfer as "possibly the biggest signing the club has ever made".

"I'll take any opportunity to play for England, it's the biggest honour you can get."

Ellis will be playing for Hull FC next season after three years playing club rugby in Australia for Wests Tigers and said he is enjoying playing for his country again.

"I've really enjoyed the series so far," he added. "I hadn't played for six or seven weeks with Wests not making the play-offs and I've actually not played many games because of the foot injury that I had.

"It's been great to be back representing England and playing alongside some of the boys I've not seen for a while."

Ellis will win his 21st cap if selected for Sunday's game at the City of Salford Stadium. However, that had looked in doubt after he was placed on report for a hit on full-back Cyril Stacul that left the Frenchman needing to go to hospital for checks.

"I like strong defence but I did not agree with the contact - it was not really fair," said Cologni.

"The player [Stacul] was injured and cannot play next weekend. It should have been a minimum one game [ban]."

Stacul, along with injured Catalan Dragons forwards Gregory Mounis and Mickael Simon, have returned returned to France to recover.

Teddy Sadaoui and Julien Bousquet have travelled in the opposite direction to take their places in a reduced 19-man squad.

"We've got three professional players going back and being replaced by part-time players so the odds aren't going to get better but we've come here to do a job and we're going to keep believing," said Les Tricolores captain Olivier Elima.

"They've got a strong team but we still believe in the same thing. We don't come here to lose, we come try to do our best which is to win."