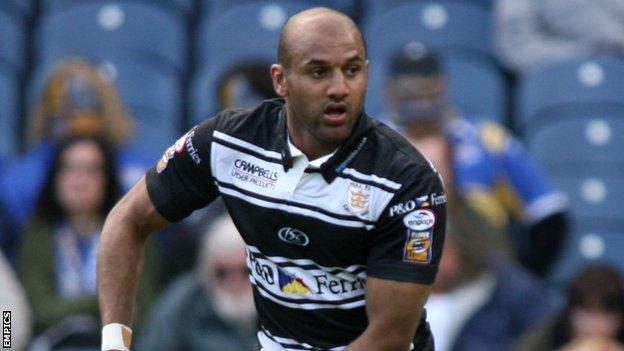 Workington Town have re-signed former England winger Mark Calderwood after he ended the season with six tries in 14 games at Derwent Park.

The 31-year-old played in Super League for Harlequins during the 2011 season before stepping down to Championship One with Town last term.

"Mark has played at the highest level and his scoring ratio speaks for itself," director Malcolm Allison said.

"His experience will be valuable to us in the forthcoming season."

Town were promoted to the Championship along with Cumbrian rivals Barrow and Whitehaven and Calderwood's pace is likely to provide a useful weapon for head coaches Gary Charlton and Martin Oglanby.

"Mark came in late last season, and scored some very important tries for us," Allison continued.

"With a full pre-season under his belt he should improve further still."

Calderwood first made his name at Leeds Rhinos, scoring 88 tries in 126 games before moving on to Wigan Warriors.

He also played for Hull FC during his top flight career.