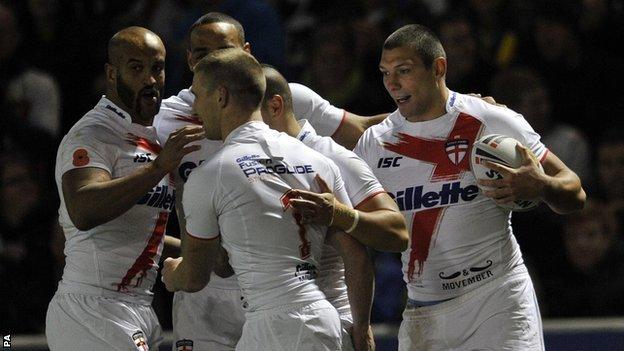 England ended the season with a thumping victory against France to clinch the Autumn International Series.

Man of the match Ryan Hall ran in four tries to add to Sam Tomkins' brace and scores from Josh Charnley and Rob Burrow as England coasted to victory.

Skipper Kevin Sinfield was perfect with the boot, kicking eight conversions at the City of Salford Stadium.

"England did everything that was asked of them. They sped the game up in the second half and looked physically a lot better than the French. To score four tries in a Test match is pretty special for anybody, and it was a nice moment for Ryan Hall. It was probably a reflection of England's team work on the night. Steve McNamara has managed to answer the question of how England want to play, and he will certainly not have a problem picking players going ahead as he has as good a squad as England have had in a long time."

France offered a late consolation through winger Mathias Pala after a grubber from William Bartheau.

England racked up 30 tries in their three games in the tournament, with Hall finishing as top scorer with six tries.

But such comfortable victories will raise questions as to the competitive use of the series, although the introduction to international rugby league for players such as Chris Hill and Kallum Watkins will no doubt be seen as a positive looking ahead to next year's World Cup.

Coach Steve McNamara's options at half-back look particularly strong, as Sinfield and Rangi Chase forged an effective unit, while there is depth in the shape of Richie Myler - dropped in favour of Chase - and Melbourne Storm playmaker Gareth Widdop who was left out of the squad.

Likewise the emergence of Hall and Charnley on the flanks, with Kallum Watkins and centre partner Leroy Cudjoe inside, suggests a healthy base to start from in the three-quarters, as does the return to Super League of Gareth Ellis - who impressed at second-row throughout the tournament.

Perhaps with thoughts of a French response to last week's one-sided affair in Hull, the opening sets were tentative, the highlight being a huge hit from Gareth Ellis on Thomas Bosc.

However, England soon found their rhythm and opened the scoring on 11 minutes with a flowing move.

Sinfield's touchfinder offered England field position, and from the resulting play Chase and Tomkins combined to free Hall on the left for an easy score, and his 150th career try.

Watkins was a fingertip away from gathering Sinfield's chip to the corner two minutes later, but France responded with a spell of pressure that had the hosts scrambling. They held firm and having weathered the storm extended their lead.

Tomkins dummied inside a string of tackles for his 15th England try after neat work from Sinfield and Chase, and Sean O'Loughlin's booming pass to the left put in Hall for a third try on the half hour.

The home side could have had a fourth had Hock maintained his composure close to the line, while France had Charnley scampering back to cover after Bosc almost got to Barthau's hopeful chip through.

England continued their momentum after the break, as Sinfield and Ellis produced a move that ended with Charnley bursting over the line just four minutes into the second period.

Hall completed his hat-trick after Chase picked him out with a beautifully executed move, again the metronomic Sinfield fired the kick between the posts, and with France struggling to cope, another searing run by Tomkins took him over the whitewash.

France's night was summed up by Hall's fourth try, as Chase intercepted a loose pass inches from the England line and carried the ball 80 metres before passing to Tomkins, who slipped the ball to the Rhinos wing to score.

Rob Burrow's trademark run saw him scoot in for his second try of the series and England's 30th but France had the last act of the game when Pala touched down Bartheau's grubber for a late consolation.