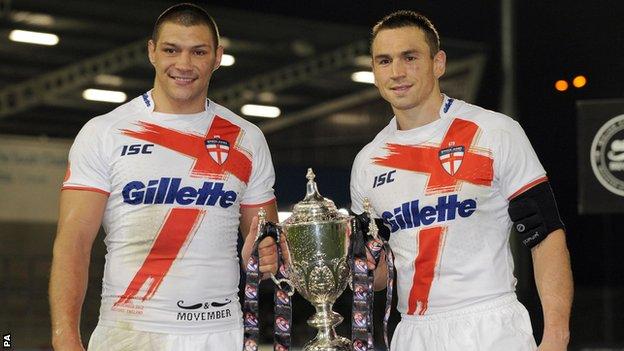 The 32-year-old was captain as England won 48-4 against France at the City of Salford Stadium to complete a high-scoring fortnight of action.

Attention now switches to the World Cup tournament on home soil in 2013.

"We are building for next year," he told BBC Sport. "Hopefully, we can drive ourselves to success next year."

He continued: "There has been a lot of criticism about this series, but for us it is really important.

"We will keep getting better and there is loads of competition for places now, with the the carrot dangling for the World Cup. The squad has been good and it has been a really enjoyable five weeks."

The series has allowed coach Steve McNamara time to assess his squad during a month-long spell which started with a training camp in South Africa, as well as the chance to claim some silverware after a 172-22 aggregate victory in three games against European rivals France and Wales.

"We have had 24 players who have been outstanding," he said.

"We have some outstanding young players and everyone has been strong, even those who haven't really played. Everything we have done has been very important.

"We are a very united group, a very strong group and we have all enjoyed it, staff and players.

"We were red-hot favourites and expected to do well, so the players have been exceptional and a credit to the Super League.

"I'm not saying what we're doing will guarantee us success, but it will give us the best opportunity. You can't put a price on what this has done for us."

England selected only Super League players for the Autumn International Series and the 41-year-old was also looking forward to the fight for places once leading Australia-based players such as Sam Burgess, James Graham and Gareth Widdopp are reintroduced to the squad.

"This is a Super League England team and when you add the players from the NRL, it'll be tough to pick a team next year," said McNamara.