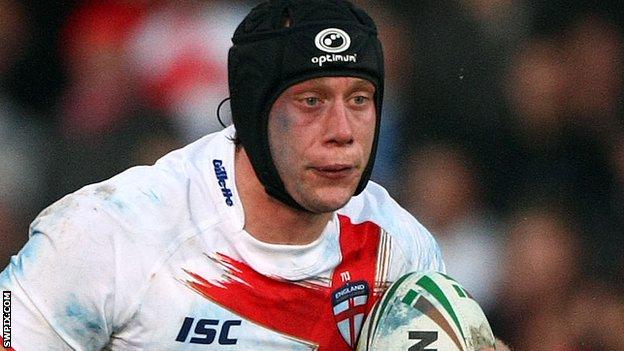 Chris Hill is desperate to repeat a wonderful debut season with Warrington Wolves and earn a place in the England squad for next year's World Cup.

Forward Hill was playing for Leigh Centurions in the Championship in 2011.

Since joining Warrington, he has lifted the Challenge Cup, played in the Super League Grand Final and won his first three international caps.

"It's another challenge for me. I want to maintain this. I don't want to be out of this setup," he told BBC Sport.

"There's a really good buzz around the England camp at the minute. It's something I want to keep going and only playing well for Warrington will help me do that.

"Playing for your country is probably the highest thing you can ever achieve. No matter who you're playing against for England, when you pull that jersey on, it's a really special moment."

The 25-year-old started all three matches in the autumn international series, with England clinching the trophy after a 48-4 victory against France at the Salford City Stadium on Sunday evening.

Steve McNamara's side scored 30 tries in the three games and conceded only four, leading some to criticise the standard of opposition England were up against in the end-of-season tournament.

Hill insisted: "It was really competitive. Fair play to France and Wales, they really brought it to us.

"It would have been nice to play the Aussies and New Zealand. You want to play against the best in the world.

"It gives me that extra incentive to play well for Warrington next year, hopefully get to the World Cup and be playing against people like that."