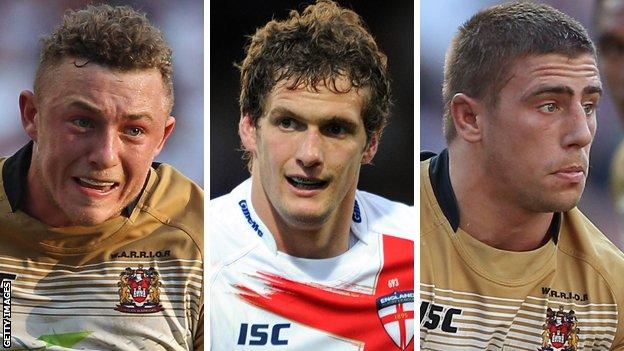 Skipper O'Loughlin will stay on as a player for two more seasons, with the option of a third, and will eventually move into the Warriors backroom staff.

Hooker McIlorum will remain with Wigan until the end of the 2015 season, with the option of another year.

Charnley, 21, against Wales in the recent Autumn International Series and at Salford on Sunday.

He notched 36 tries in all competitions last season, as Wigan won the League Leaders' Shield but fell at the semi-final stage in both the Challenge Cup and the Super League play-offs.

On the field, we have made great strides in recent seasons winning the Grand Final and Challenge Cup. I am certain we can continue to move forward in the right direction and reward our loyal fans

"The last couple of years has been a bit of a whirlwind for me but I have loved every minute of it," he told the club website.

"I owe much to the players around me and without them I wouldn't have been in the position to score as many tries as I have.

"We have a great team and it is an honour to play for this great club. We have a squad that I am certain will be continuing to challenge for the top honours in the game over the next few seasons."

O'Loughlin made his first-team debut for Wigan in 2002 and turned down a lucrative offer from the NRL in Australia to remain with his hometown club.

"I am thrilled to have signed a new deal and am looking forward to the next couple of years as a player before having the wonderful opportunity to join the backroom staff," said the 29-year-old.

"On the field, we have made great strides in recent seasons winning the Grand Final and Challenge Cup. I am certain we can continue to move forward in the right direction and reward our loyal fans."

Wigan have made two new additions to their squad ahead of the 2013 season, with and joining the Warriors from Hull KR.