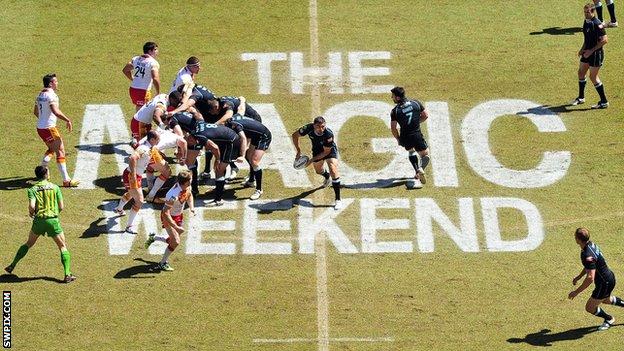 Super League's Magic Weekend will be played at Manchester City's Etihad Stadium in each of the next two years.

The event was staged in the North West for the first time in May and attracted a record attendance of 63,716 combined over the two days it was held.

"The overwhelming majority of fans had a fantastic experience at the stadium and were keen to return," said Nigel Wood, chief executive of the RFL.

All 14 Super League clubs will play a match at the event, with the seven fixtures set to be confirmed on Monday.

The Rugby Football League had previously taken the Magic Weekend, which was first staged in 2007, to Murrayfield in Edinburgh and Cardiff's Millennium Stadium.

But the success of this year's event has convinced the RFL to keep it at the home of football's Premier League champions until 2014.

Wood continued: "The location and lay-out of the Etihad Stadium provides the perfect setting for this unique and very special sporting event.

"I am sure Magic Weekend will continue to grow in stature as more fans experience the extraordinary nature of Super League."