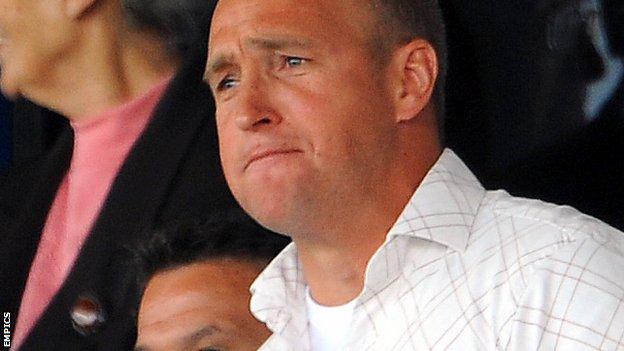 "If we can get a little bit of improvement from every individual in the squad, hopefully we can go further than we have in previous years."

Under Saints failed to reach the Grand Final for the first time in seven years last season.

They were in the Super League play-off semi-finals, having finished third behind Wigan and the Wolves at the end of the regular season.

as successor to Royce Simmons was confirmed in April and he was due to remain with the Giants for the remainder of the 2012 campaign.

However, in July, shortly after Huddersfield's exit from the Challenge Cup at the semi-final stage.

But with a sound base of local players to choose from, Brown is confident that he can achieve success with his new club.

"It's not long ago that Keiron Cunningham, Sean Long and Paul Sculthorpe all retired and James Graham left," he added.

"But then you've got Jon Wilkin, James Roby and Paul Wellens who have all played for their country.

"Ade Gardner has played for his country in the past and I'm sure he would like to get back there.

"St Helens provides players with lots of experience, who are generally home-grown players. The English players generally come through their system."

Hull FC duo and as well as have been added to the St Helens squad ahead of next season and they have all been tipped to make an impact in 2013.

"Willie's career has really blossomed since he's been in England," said Brown, who guided Huddersfield to the Challenge Cup final in 2009.

"Every time a club plays against Willie, the opposition talks about him and he'll definitely provide something.

"Jordan is a younger kid who is on the rise and he's a player that we think will bring plenty to the table."