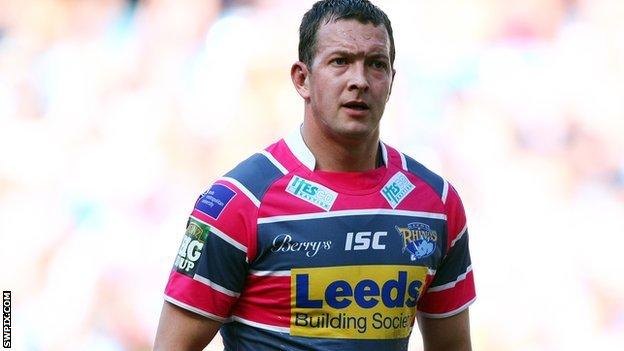 Leeds Rhinos half-back Danny McGuire has signed a new contract keeping him at Headingley until the end of 2015.

McGuire, 29, who has won six Grand Finals with the club he made his debut for in 2001, had 12 months remaining on his previous deal.

He is Super League's leading try-scorer with 201 for the reigning champions.

"I am feeling great at present and I am really pleased to get the contract agreed and signed before the start of pre-season," said McGuire.

He added: "I can now fully focus on getting myself in the best possible shape for a massive season for the Rhinos and myself, with it being my testimonial year."

McGuire has enjoyed a successful career at the Rhinos, winning three World Club Challenge trophies to go with his Grand Final rings.

The Leeds man has also been selected to play for Great Britain, and played for England at the 2008 World Cup.

Head coach Brian McDermott paid tribute to the number six, who is fifth in the club's all-time try scorers list.

"His value to this team is never underestimated and I am delighted he has agreed a contract extension," said McDermott.

"Danny is a unique talent and we are very privileged to have him play his entire career at Leeds Rhinos.

"We all have been guilty over the years of perhaps taking him for granted in terms of what he does for this team because he performs at such a high level every time he steps onto the field."