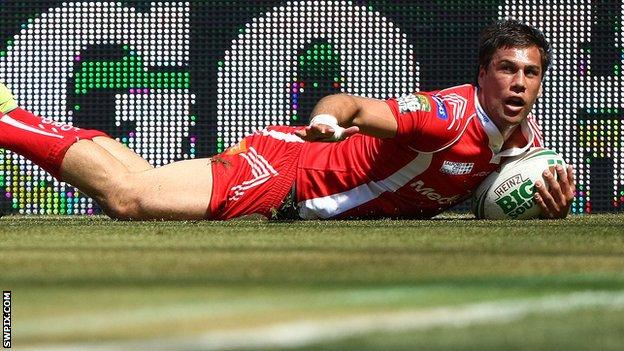 Head coach Phil Veivers has accused Joel Moon of a lack of commitment to Salford City Reds after the Australian centre completed a move to Leeds.

The 24-year-old took the Reds to a tribunal to get out of his contract at the end of last season, but failed.

"He said he was homesick. I haven't checked the map but I presume Leeds must be closer to Sydney than Salford is," Veivers told the club website.

He said he was homesick. I haven't checked the map but I presume Leeds must be closer to Sydney than Salford is

Moon has agreed a three-year deal with the champions, who have paid an undisclosed fee for the player.

The Reds coach continued: "I met up with Joel in Australia, where he stated his commitment to our cause. Since I've returned to the UK, I've heard nothing but excuses as to why he wasn't on the plane.

"I've said this before - I only want players in my team who are committed to the club and prepared to give it everything.

"I'm disappointed because he's a good player, but the squad needs to have the right attitude. There's no room here for anyone without it."

Salford, who to assure fans that their ongoing discussions about new investment were progressing, have made only one new signing - - since the end of the Super League season.

Veivers added: "When we get recruitment right, this club will go places.

"We're working on that now, and if everything falls into place as we expect it to, I'm confident we'll put a squad together that is committed to the cause and competitive on the field next season. Then we build from there."