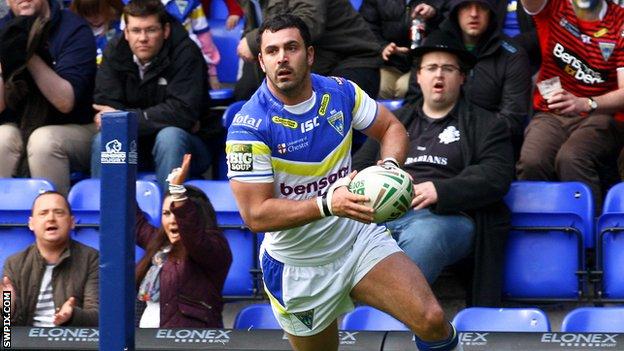 Wales winger Rhys Williams has signed a new two-year contract that will keep him with Warrington Wolves until the end of the 2014 Super League season.

The 22-year-old made his first-team debut for Wire in March 2010, but has had loan spells with Crusaders and Castleford in the last two seasons.

"I've been at the club a few years now so I am happy to stay," he said.

Youngsters Gene Ormsby and Gavin Bennion have also signed new deals and will join the first-team squad in 2013.

Winger Ormsby, 20, and 18-year-old second rower Bennion have agreed to stay with Warrington until 2015 after impressing for the club's under-20 side.

Tony Smith's side enjoyed an excellent 2012 season, winning the Challenge Cup for the third time in four years and reaching their first ever Super League Grand Final, but their hopes of a double were ended by Leeds Rhinos at Old Trafford last month.

Williams, who became his country's top international try scorer earlier this summer, is hoping to force his way into the Wolves line-up regularly in 2013, so that he will be in top form for next year's World Cup.

"It is coming round much more quickly than I thought," he added.