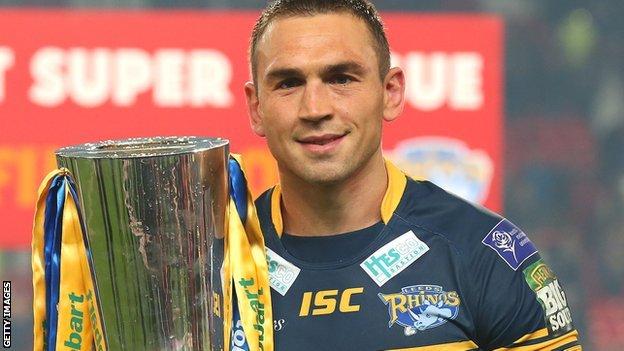 Leeds Rhinos skipper Kevin Sinfield has been reflecting on an "unbelievable" decade as captain of the club.

The 32-year-old, who is also England captain, took over the role from Francis Cummins on 3 December 2002.

He told BBC Radio Leeds: "It's gone so, so quick and it's been a wonderful 10 years.

"I think if you'd offered me what the club has gone on to achieve back on that day in 2002 I would have snapped your hand off."

Sinfield added: "Obviously there has been some low points along the way but I certainly can't complain.

"We'd lost Iestyn Harris a year and half before and Francis Cummins had been doing a great job as captain. It could have gone to any number of the senior players but fortunately I was offered the job.

"It was tough to start with because I was trying to lead blokes who were 10 years older than me and had a lot of Great Britain and England caps."

Then Rhinos coach Daryl Powell made Sinfield the youngest skipper in Super League back in 2002 and the club have designated Monday 'Sir Kevin Sinfield Day' in honour of the Oldham-born loose forward.

He admits to being "humbled" by the way the club have chosen to mark his anniversary.

"It's a little bit embarrassing really because I'm quite a private person," he continued.

"It is really nice and I'm really humbled by it. The club have been very loyal to me and I'd like to think I've repaid that."

Sinfield has taken the Rhinos to the last three Challenge Cup finals but lost on every occasion.

Despite it being the only major competition to elude him he insists he will not be putting any more extra emphasis on winning the trophy.

"We won't be taking any more seriously than we do every other year," he concluded.

"We've been pretty close the last few finals and I've lost five as captain, which doesn't sit right with me,

"For a club like Leeds not to have won the trophy since 1999 hurts a great deal and it is certainly something we'd like to put right."

He has the chance to add another piece of silverware to his and the Rhino's cabinet in February when Leeds host Melbourne in the World Club Challenge at Headingley.