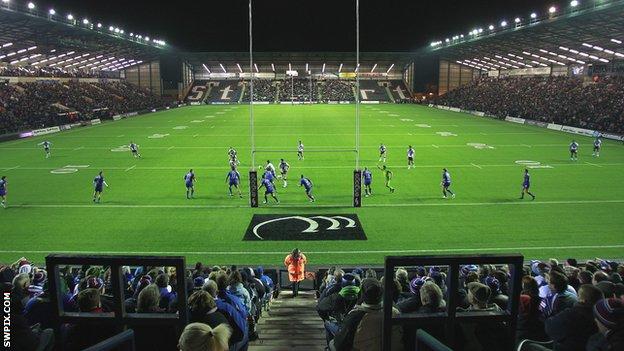 O'Connor took control of the club in 2007 and his input helped Widnes regain their Super League status last year.

Rule, who was told BBC Radio Merseyside: "The immediate challenge is to develop a more sustainable business model.

"The club has been overly reliant on the generosity of Steve O'Connor."

Rule, formerly CEO at Hull FC, continued: "Without it, I don't think the club would be in existence. That's not unusual in rugby league because I think there are a number of clubs supported by the generosity of an owner.

"It's now about looking at what we can do and the changes we need to make, in order to make it more sustainable and ensure that this club is here for many years to come."

The Vikings had an average home gate of 5,942 in Super League last season - almost 60% up on their average attendance in the Championship in 2011, but around 1,000 short of their initial estimate.

They plan to switch some of their home fixtures away from their traditional Sunday slot and play on Friday evenings - something Rule is willing to try in an attempt to attract more fans to the Stobart Stadium next season and beyond.

He added: "We've had three complaints on email since we announced it, but we've had a number of very positive conversations with fans.

"When you change things, there will always be a natural reaction - some positive and some negative.

"The initial business plan, expectations and investment associated with that plan were based on average attendances of 7,000. They didn't transpire last year, so we have to look at different areas.

"Playing on Friday nights is one small area of that. It's not about reinventing the wheel. It's about building on the great work that's already been done by the staff here and bringing a little bit of experience in some areas to enhance that."

Widnes finished bottom of the table on their return to Super League, but coach Denis Betts has already stated that he expects an improvement next season as the club have a at the top level.