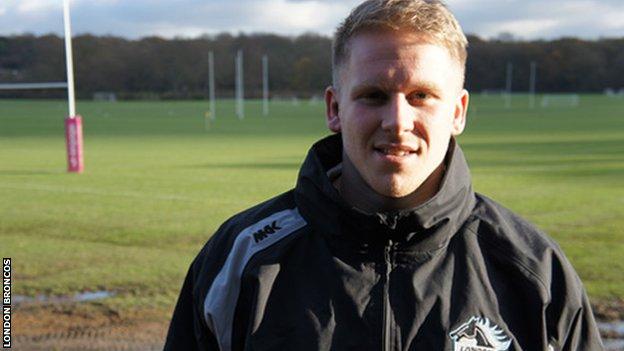 London Broncos have signed Swinton Lions centre Alex Hurst on a full-time contract for the 2013 season.

The 21-year-old Scotland international, who can also play at full-back, had been with the Twickenham Stoop outfit on a one-month trial.

He said: "It's a big step up. It's a massive challenge for me and I'm dying to get some games under my belt and press for first-team rugby.

"It's what every rugby player wants to do and I'm here to take my chance."

He added: "I've not come down to make up the numbers, I just want to rip in and be competing for a first team spot.

We've thrown him some challenges and he's met them all

"I wouldn't be down here if I didn't think I was good enough, so I'm more than ready for the battle ahead."

Broncos head coach Tony Rea said he has been impressed with Hurst during his trial period.

"We've thrown him some challenges and he's met them all," Rea said.

"He's mixed in well with the group and done everything we've asked of him.

"We think we'll be using him if he keeps applying himself well, there's an opportunity there for him. It's over to him and he's going to have to work.

"This time of year is easy. He needs to keep building on that for when the pressure of games is here."

Meanwhile the Broncos have extended the trial period of Wigan Warriors player John O'Donnell until the end of February.