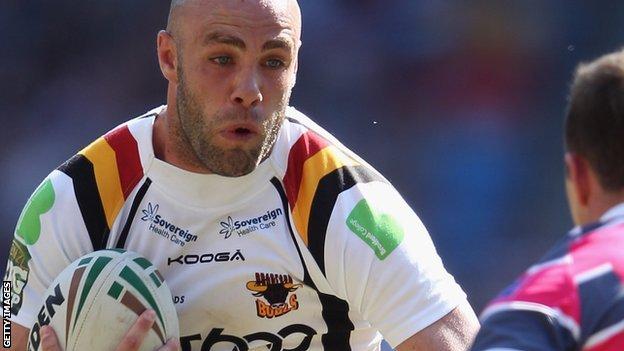 Bradford Bulls centre Adrian Purtell has been given the all-clear to resume his rugby league career.

The Australian, 27, suffered a heart attack after a Super League game against Leeds Rhinos at Manchester City's Etihad Stadium in May.

Purtell, who joined the Bulls from Penrith Panthers in 2011, underwent heart tests in London this week.

"I didn't know what to expect really and I was in shock when the specialist gave me the news," Purtell said.

"It didn't really sink in until I was on the train coming home but I am obviously delighted.

"I felt myself that I'd be OK because I have been doing some training and felt good, but I am not a medical person so it was pretty awesome to get that news from such an eminent specialist."

Purtell, who is 12 months into a three-year contract with the Bulls, felt unwell on the coach after the 37-22 defeat in Manchester and was taken to Leeds General Infirmary.

"Last year was a tough one for the Bulls but the boys all bonded together and stuck by me and the club has been absolutely tremendous throughout," he added.

"I am just looking forward now to getting back into full-time training and playing games with my mates. That's what I want to do most of all."

Bradford coach Francis Cummins said: "It's great for us because we have got one of our star players back.

"But for Adrian it's an amazing piece of news because we weren't even sure whether he would be able to live a normal life, let alone play again."