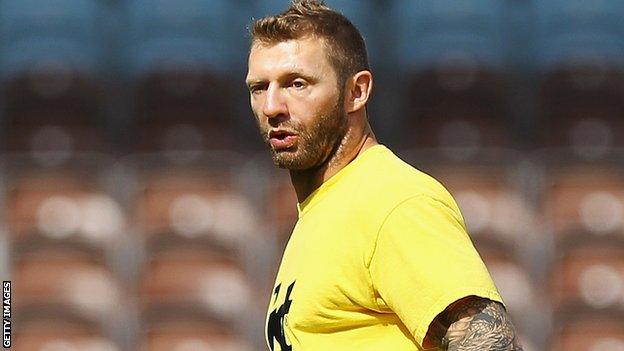 Assistant coach Sean Long says there has been a lack of communication with staff and players over the financial problems at Salford City Reds.

The future of the Super League club is in doubt after which would have seen a total of £1.5m invested.

Long told BBC Radio Manchester: "The players are coming to us and you can see they're frustrated and upset.

"We're in the dark as much as anyone. Someone needs to come out and speak."

"The most important thing is that the future of Salford City Reds is secured. Clearly the move to a new stadium has not worked out. The reasons why are issues that need to be addressed in the future, while the lack of communication from the club is very worrying. But the immediate priority must be to reach a deal that ensures Salford can start the next Super League season. The current board have got to make decisions that are in the best interests of the club and everyone connected with it. Following on from the problems at Bradford Bulls, maybe the whole financial structure of Super League needs reviewing. How many more clubs have to endure serious financial difficulties before the game's governing body realises there are major flaws in the system?"

The former Great Britain international continued: "We're trying to put their minds at ease and tell them what we know, but we know nothing. It's really difficult for us."

The council are already owed £1.5m by the Reds and the proposal to loan another £750,000 was put forward on Tuesday, but it was rejected because the local authority was unhappy with the level of risk involved.

Had the bailout package been approved, that £750,000 figure would have been matched by Peel Holdings, the co-owners of their Salford City Stadium home.

The loan would have been in place until November 2013, with the council and Peel taking over the running of the club.

Salford mayor Ian Stewart told BBC Radio Manchester that the decision was made "with a heavy heart" and said he hoped the club's supporters would have an influence on helping the Reds through their current financial difficulties.

"I really think that if there is to be a future for this club, the fans must be involved in that future and in a better way than they have been in the past," said Stewart.

Salford are currently the subject of a winding-up petition, with a hearing scheduled for 7 January.

It was in October, and although a settlement with them was agreed, two former players - Luke Patten and Vinnie Anderson - and Revenue & Customs

In a statement, the Rugby Football League said: "The RFL is disappointed that the discussions to transfer the ownership of Salford City Reds to new owners have broken down.

Jordan James: "Well I hope someone with money comes in to help our club. Don't fancy the dole queue just yet!"

"The RFL is currently in talks with all relevant parties and remains confident that a positive solution can be reached."

Ever since Salford's move to their new stadium at the start of the 2012 season, chairman John Wilkinson has but has frequently

But there has been no comment from any senior figures at Salford City Reds since Tuesday's announcement was made.

The financial uncertainty has severely affected Salford's preparations for the 2013 Super League season, with coach Phil Veivers only able to add one new player - - to his squad since the end of the campaign.

Long added: "We found out last night [Tuesday] that the council aren't helping us out, so we're in limbo.

"We're waiting for the green light to go out and sign some players, otherwise we'll just crack on with the job and do the best we can for Salford City Reds, like we've done for the last eight weeks."