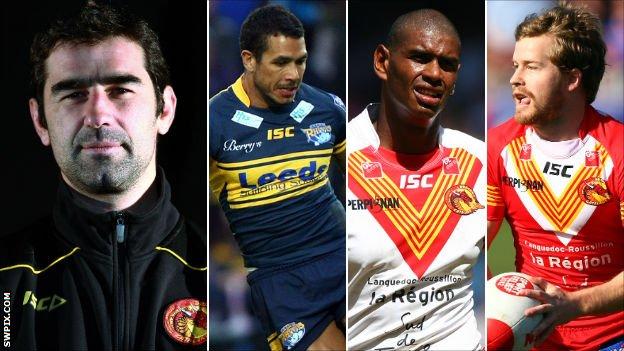 The Dragons ended the 2012 season in fourth place, their highest finish since entering the competition in 2006.

"I want to be a consistent team who can perform week in week out, and to win big games," Frayssinous told BBC Sport.

"There is small pressure to stay in the top four, but with the quality we have I have no doubt we can achieve that."

The 35-year-old, who was after Robinson's departure, played for the club in their inaugural campaign and was initially persuaded to join the backroom team by David Waite during his spell in charge.

Former Great Britain coach Waite returned to the Stade Gilbert Brutus in the off-season to complement Frayssinous and was also joined by conditioning coach Adam Trypas from the Newcastle Knights.

"I have Jerome Guisset to take care of the defence, David Waite the attack and a new conditioner, so I'm pretty happy with the way they work and the way they manage to improve the quality of the players," Frayssinous added.

"I'm pretty excited with my position, but I know I also have the quality personnel to make the players better."

The majority of the Catalans squad have been kept busy in the post-season with international duty, with France involved in the Autumn internationals series.

Despite beating Wales in the unfamiliar surroundings of Lens, a brace of defeats by England at Craven Park and Salford ended the series but Frayssinous is optimistic about the long-term impact.

"It's pretty much the same for the Dragons in the Super League, it's always about the small details, how you win games," he added.

"If you watch France, they have the enthusiasm, they work hard, they tackle hard but it's all down to those small details.

"The scoreline doesn't reflect the difference between the two teams but if you look at the England tries, with their execution, every time they broke the line or the French made an error they scored.

"It's a good lesson for the French players who are playing for the Dragons and that's the way we need to improve."