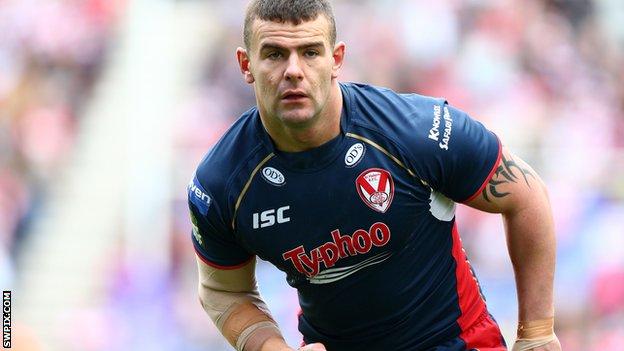 St Helens forward Shaun Magennis has announced his retirement from rugby league after a succession of injuries.

But his career has been blighted by injuries and, after failing to recover fully from a knee problem, Magennis has decided to end his playing career.

"My knee has been bad for a few years. It came to a point when I couldn't train fully and I stopped looking forward to training," said Magennis.

He told the club website: "My knee was that sore. When I did train, it was swelling up and I wasn't fully fit.

I have played in a lot of big games. I haven't done what I wanted to do, like win trophies and play for the national team, but that is life

"I spoke to my surgeon and he said he could do an operation so I could get on with the rest of my life. In the end, I chose that and now I have to move on.

"I could have played for another year, but that would have made it worse and I was struggling with everyday life as it is. It was tough to go upstairs and walk, so that's why I had the operation."

Magennis was predicted to have a very bright future in the sport when he made his breakthrough into the first team at St Helens, and he insists he can look back at his truncated professional career with pride.

He continued: "I have played in a lot of big games. I haven't done what I wanted to do, like win trophies and play for the national team, but that is life.

"I have played rugby since I was seven and have put a lot into it. Now I have to do that in another career."

St Helens general manager Mike Rush added: "We are all upset that Shaun has had to retire from the sport.

"He has shown great mental toughness to come back from a number of injuries, but sadly this latest one is one step too far.

"We will continue to rehabilitate Shaun and offer as much support as we can as he looks to take up the next challenge in his life."