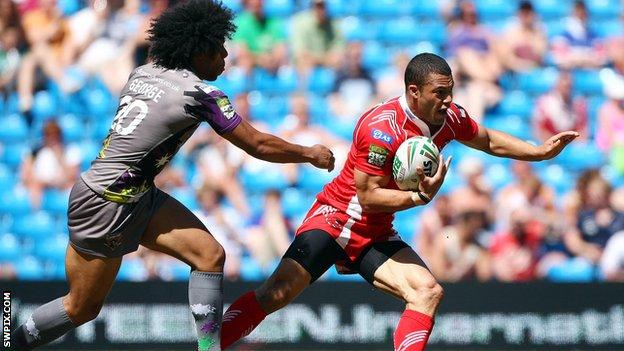 Salford City Reds chairman John Wilkinson says he has been given assurances by the Rugby Football League that there is genuine interest in saving the club.

A deal was in place for a loan of £1.5m from Salford City Council and Peel Holdings, the co-owners of their stadium, but

The RFL is continuing to assist in the search for new investors.

And Wilkinson said all interested parties wanted the club to survive.

However, he has admitted there is no guarantee that the Reds will be able to start the 2013 season.

Salford, whose bank account has been frozen, are currently the subject of a winding-up petition, with a hearing scheduled for 7 January.

It was and although an agreement was reached with the management consultancy company, Revenue & Customs and two former Salford players - Luke Patten and Vinnie Anderson -

At an open meeting with supporters on Monday, Wilkinson pinpointed over-investment in the team in 2011, their final season before moving from The Willows to the Salford City Stadium, and the economic downturn as key reasons for their financial troubles.

He revealed that there had been an increase of £450,000 in the playing budget because of the most expensive squad ever assembled by Salford.