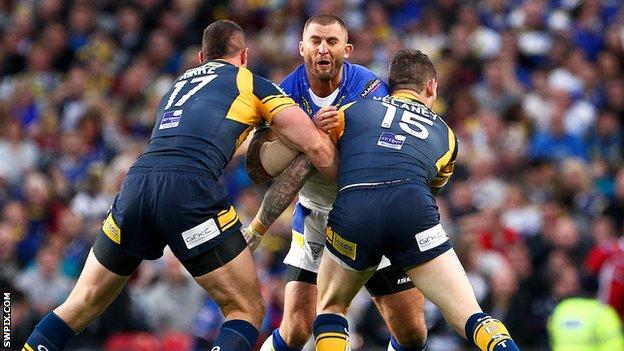 Paul Wood, who had a testicle removed following Warrington's Grand Final defeat in October, made his playing comeback for the Wolves on Boxing Day.

The prop featured in the 30-22 friendly victory over Widnes Vikings.

Wire coach Tony Smith told BBC Radio Merseyside: "Paul did a terrific job, particularly after the injury that was well advertised in our last game.

"He's come back in good form so I'm pleased. We've come out of the game pretty much unscathed."

Wood told the club website: "I'm just glad to get it under my belt and just get a bit of confidence back really. It's the same with a few of the lads, as many of us haven't played since the Grand Final.

"I was quite nervous. Obviously I was worried about my previous injury.

"Once the game kicked off, I did feel a bit rusty, but it's a pre-season friendly and we'll kick on from here. I know what I need to work on now."

The 31-year-old was hurt in and played on for around 20 minutes, despite suffering an accidental blow that ruptured his testicle.

He later went to hospital to

A youthful Warrington side ran in five tries to defeat the Vikings at the Stobart Stadium, leaving the Wire coach confident of more trophies in 2013.

Smith, who after guiding Warrington to and a first ever Grand Final, added: "January is going to be a full-on month and we're really excited about our prospects."