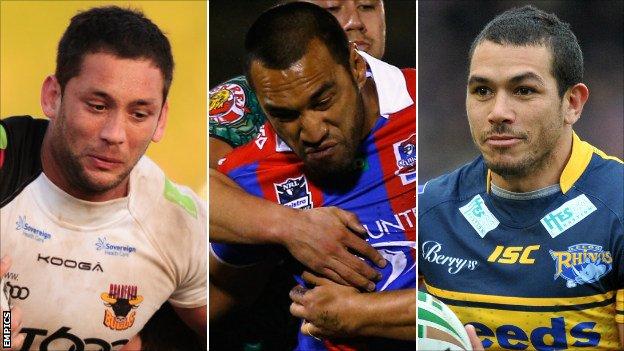 Clint Greenshields, David Ferriol and Setaimata Sa all left the Stade Gilbert Brutus after helping the Dragons to the Super League play-offs in 2012.

"We've got the same quality in the three," Frayssinous told BBC Sport.

"I have no doubt that it will be easy for them to integrate in the group and our style of play."

Elima, France's international captain, returns to Perpignan after a three-year absence from the club where he was at his most prolific with 30 tries. The 29-year-old has signed a two-year deal.

"He is an international player of renown who greatly will improve our pack, both in attack and defence."

The 28-year-old overcame a serious neck injury to remain a regular in the Knights pack. Versatile, he can play lock, second-row, prop and centre.

"Zeb is a player that I have enjoyed working with and continued to enjoy watching play. His style is aggressive which is attractive for the Catalan Dragons."

The 32-year-old New Zealand international featured in every major final in Super League while with the Rhinos. His try-scoring attributes from full-back made him a favourite with the Southstanders at Headingley.

"Brent has been an outstanding player for Leeds Rhinos, one of the finest overseas players this club has ever had, and I am sure he will be doubly determined to finish his time at the club at the very top."

London Irish-bound Sa was prolific with nine scores at centre, while prop Ferriol was a regular feature in the Catalans pack with 19 appearances before his retirement.

Meanwhile Greenshields, 31, was pivotal in 2012, contributing 18 tries from full-back to end the campaign as the top club tryscorer.

The Australian returned to the NRL in his native country to play for the North Queensland Cowboys, ending his stay in Super League with 77 tries in 127 games.

Webb arrives in the south of France with an impressive CV of honours during a five-year stay at Leeds Rhinos.

The 32-year-old played in and won three Grand Finals, lost a Challenge Cup final and won the World Club Challenge. although a season-ending knee injury limited the Kiwi to 15 appearances in 2012.

"We already talked about it with Brent, we said we need to push our squad to win those big games like Leon Pryce did last season," Frayssinous said.

"Webb adds something to us, with that experience to win big games, it will definitely help the other players."

Although the Perpignan club's winter recruitment was confirmed under former head coach Trent Robinson before his switch to Sydney Roosters, Frayssinous was involved as part of the coaching staff.

"Trent always shared ideas, he always made his own decision but we discussed about signing Brent, Olivier and Zeb," he added.

"Trent knew about Taia because he coached him at Newcastle, I know Brent Webb's strengths and his quality and I know about Olivier Elima.

"We shared the idea about the three guys coming to the Catalans squad."