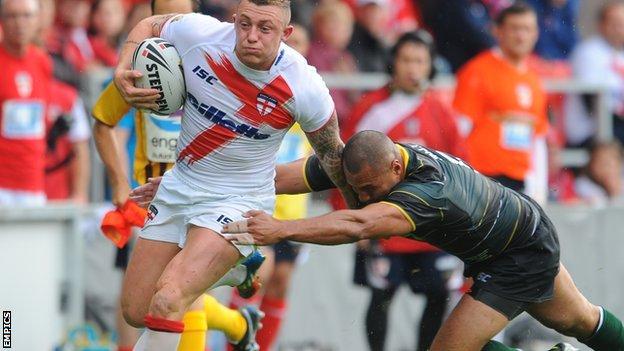 England's World Cup preparations will start with an International Origin game against the Exiles on 14 June.

The match will be played at the Halliwell Jones Stadium, Warrington, in what will be the fixture's third year.

The Exiles, drawn from Super League's southern hemisphere players, will provide England's only competitive game ahead of the World Cup.

England coach Steve McNamara said: "It's going to be a big night for everybody."

The game will be a chance for England to test themselves against quality southern hemisphere opposition.

"It's a massive game for England and every English player who aspires to being involved in our plans for the World Cup," added McNamara.

The 2012 series was tied with an 18-10 victory to England at Langtree Park in June followed by a 32-20 victory for the Exiles the following month at the Galpharm Stadium, Huddersfield.

McNamara added: "We are delighted by the choice of venue; there's always a terrific atmosphere at The Halliwell Jones Stadium and the players all like playing there."

England face Australia in their opening match of the 2013 World Cup in October.