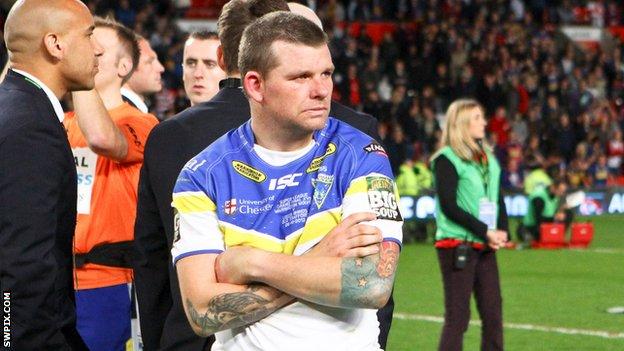 "That Grand Final (defeat) has given me even more determination," the half-back, 34, told BBC Radio Merseyside.

"My enthusiasm is exactly the same and it's never wavered. I'm really looking forward to going again."

Briers, who was in his illustrious career, revealed he could not watch a re-run of their loss against Leeds at Old Trafford until two months afterwards.

I've got no doubt that the players will put on a great show for the fans. The Super League will be as strong as it's ever been.

"I'd not been training for 10 weeks, so I had a lot of time to think," the Welsh international continued.

"I couldn't watch the Grand Final. I didn't even know what score it was. It was only until I watched the season review, which is a couple of months later, that I could watch it."

Warrington, playing in the Grand Final for the first time, led by four points early in the second half.

But the Rhinos, inspired by captain Kevin Sinfield, fought back to retain their Super League crown, only six weeks after

Coach Tony Smith has instead keeping faith with the side that enjoyed one of the most successful years in the club's history.

They are among the favourites for Super League glory in 2013, but Briers believes many of the 14 sides have genuine title aspirations.

"I honestly think it's going to be more even this year," said the former Wales international.

"You've got the likes of Hull, who are going to be coming strong, London Broncos, Wakefield, Catalans - players have spread themselves around the Super League clubs and there's been a lot of signings.

"I've got no doubt that the players will put on a great show for the fans. The Super League will be as strong as it's ever been, and hopefully people outside the game can match that."