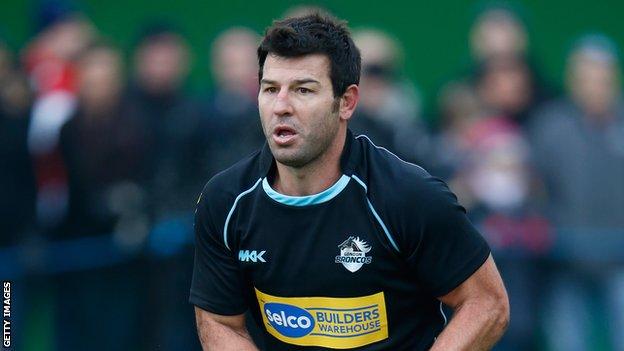 London Broncos captain Craig Gower says his side must implement their work from pre-season when they begin the new campaign next month.

He told BBC London 94.9: "Now there are no excuses. We had a poor start to the season last year and it just spiralled.

"It's about implementing our training and getting off to a positive start. We have done all the work so it is about going out there and doing it."

The Broncos had a late rally at the end of the 2012 season, winning four of their last five games following the return of Tony Rea as head coach.

The Twickenham Stoop side, who have secured victories over London Skolars and Toulouse Olympique so far in pre-season, begin the season at home to Widnes Vikings on Sunday, 3 February.

"Everyone is probably confident with where they are at the moment," the 34-year-old Australian half-back added.

"Everyone has done their fitness and gym work and it is now about doing.

"First and foremost, we need to get off to a good start.

"It will be a process on the way. We will have some hiccups but we need to make sure we get back on the horse.

"We need to get our confidence up by winning games straight away.

"Hopefully it will be smooth sailing from there.

"The young guys will have had a year of solid football and will have gained experience from that."

Gower hopes that the club can move on from what proved to be a transitional season, when just three wins in their opening 20 Super League matches cost Rob Powell his job and saw Rea return to south west London.

Last year I thought we were a team. It doesn't matter if you feel it. You have got to deliver it

"I've had seasons like that where certain things happen and you don't reach the level you expect to," he said.

"They can be frustrating because the season goes down the drain.

"The results just weren't going our way. That was a frustrating thing, especially when I know there is a talented group of guys here.

"Last year I thought we were a team.

"It doesn't matter if you feel it. You have got to deliver it. Especially coming to the end of my career, you want to be winning games and competing at the business end of the season."

Earlier in the off-season Gower signed a one-year extension to his contract, which will keep him at the club until the end of 2014.

"The opportunity arose to go somewhere else for a couple of years and I asked the club if they would extend my contract," the dual-code international said.

"They did that and that was great. It worked out well for myself and the club.

"It's a long season and hopefully I can contribute well and we play well as a team."