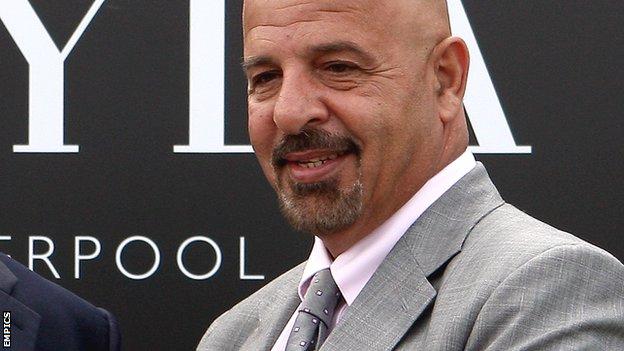 Koukash, who is based in Liverpool and is also a racehorse owner, for more than a month.

The deal ends fears that Salford could be forced into administration.

"This is a very exciting day for Salford City Reds and a momentous day for rugby league," said Koukash following Thursday's announcement.

"No other club in the sport has the potential of Salford City Reds and I give a firm commitment to do all I can to help realise that potential.

29 October: Dispute with Gregsson settled out of court, but Revenue & Customs and two ex-players join the action

"It will not happen overnight and I urge our fans to be patient as we set out on an amazing journey. My message is that the hard work starts now.

"I have not purchased Salford City Reds just to save the club. I have done so because I want it to succeed."

The takeover comes after financial problems dogged the Reds throughout the 2012 season, with Revenue & Customs owed around £300,000, and due a combined total of £70,000 in unpaid wages.

But Koukash, who has confirmed that all creditors will be paid in full, will now take over at the side which had a winding-up petition issued against it, which was

in December, with Reds supporters then staging a number of fundraising events and bucket collections before home games.

Neighbours from the pre-season friendly meeting between the two clubs on 6 January to aid Salford's survival bid.

And in mid-January, after long-serving chairman John Wilkinson revealed talks with a potential new investor - who at that stage was unnamed - were at an advanced stage.

Koukash had been discussing the deal with the Rugby Football League, as well as Salford City Council and Peel Holdings, the co-owners of the Salford City Stadium.

The 54-year-old was present at Salford's friendly against Wigan on 17 January and outlined his hopes for the club, saying the prospect of winning a trophy was the main reason for his decision to get involved in rugby league.