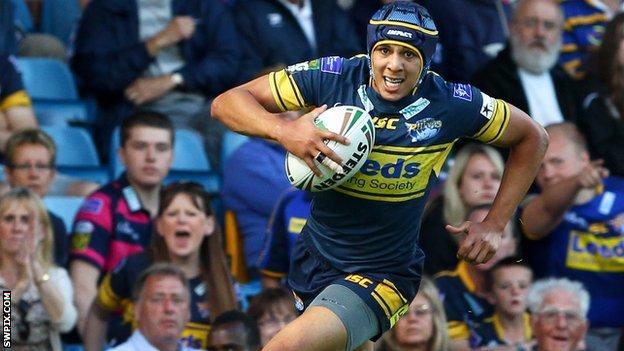 Leeds Rhinos winger Ben Jones-Bishop believes he could be back quicker than initially thought following treatment for a blood clot in his lung.

The 24-year-old was diagnosed with a pulmonary embolism during pre-season training and was expected to be out for up to six months.

"I feel OK and I'm back in light training," he told BBC Radio Leeds.

The conditioners thought something wasn't quite right and they sent me to a specialist. It was a massive shock when I got the diagnosis

"With my scan results showing signs of improvement I think the time out might have come down."

He added: "I've got 10 weeks of non-contact training while I'm still on my medication and then I'll have some more blood tests and we'll take it from there.

"I don't want to put a comeback date out yet, I'm just taking it each checkpoint at a time."

He went for what he assumed was a routine scan on Christmas Eve after struggling in training.

"The specifics of my case are quite peculiar really because normally people who have it are quite unwell while I was fine apart from when I was doing some running," he said.

"The conditioners thought something wasn't quite right and they sent me to get tested. It was a massive shock when I got the diagnosis.

"I'm fortunate the coaches and the doctor were switched on because otherwise it could have been much worse."

Jones-Bishop is hopeful he could still figure in this year's World Cup but says his main target is getting back into the Rhinos 13.

"I've not written it off at all but first of all I need to get my shirt back here and that is what I will be concentrating on," he added.