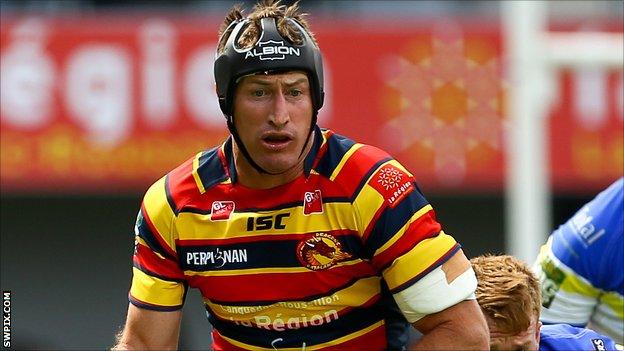 When Steve Menzies finally hangs up his trusty scrum-cap and boots, scientists might ponder testing them for secrets of eternal youth.

At 39, the Catalans second-row will embark on his 21st season in professional rugby league, having joined NRL side Manly from junior rugby in 1993.

Last season, he made 22 appearances across the board, scoring nine tries and - not bad for the oldest player in the competition.

However, the grandmaster of Super League is convinced that 2013 will be his swansong.

"I'm pretty sure this is my last year, I don't think I've been this sure," Menzies told BBC Sport.

"I feel pretty positive about the season before it starts and the body is pretty fresh without all the bumps and knocks.

"But it's time to say this is it, I won't make an official decision at this stage but we'll give it a couple of months. I've had a good run and I can't complain."

Away from the pitch, the Super League has endured a tough winter, in particular with Salford City Reds' financial problems.

While the future looks brighter for the Reds with Dr Marwan Koukash's takeover moving closer to completion, Menzies is concerned for the longer-term impact on both players and clubs.

"I don't know the ins and outs but it is worrying that while the players and the skill levels are getting better there are then the dramas where clubs don't have money and players don't get paid.

"The Rugby Football League has to make sure the players that make the game are looked after financially without getting burnt.

"Players tend to focus on the on-field stuff and the clubs work on the business side, making sure 1+1 = 2. I don't have the answers but the RFL just needs to keep being pro-active."

Menzies moved to Perpignan for the 2011 season after two seasons at Bradford Bulls and the sunshine, not to mention the region's enthusiasm for the sport, has had a revitalising impact.

"There's great culture wherever you go, I loved it at Bradford, but over here in the south of France they're passionate about whatever they do," he said.

"There are French juniors seeing Catalans playing in Super League and doing well, which is great as it's something they aspire to."

One of the catalysts for the Manly-born second row's switch to the Stade Gilbert Brutus was the presence of head coach Trent Robinson.

Robinson - a French-speaking Australian who ended his playing career at Toulouse - helped mould southern hemisphere imports such as Menzies, Clint Greenshields and Scott Dureau with French home-grown talent in Thomas Bosc, David Ferriol and Remy Casty, and in turn made the Catalans a genuine Super League force.

However, Robinson's return to the NRL with Sydney Roosters at the end of the 2012 has seen former player Laurent Frayssinous promoted to coach from the backroom staff, ably supported by former Great Britain coach David Waite and Jerome Guisset.

"It's been great for Laurent, the first French guy to coach the Catalans, and I think it's a great choice by the board," Menzies said.

Menzies on the new signings

He's come home to where he started. He's got some ball skills up front and can do an offload, supporters know the way he plays.

Zeb has a lot of skills for a forward, he'll be exciting to watch and I'm expecting a really big season from a top-quality rugby league player.

Brent has been in SL long enough for people to know what he's capable. It's a big loss losing Clint Greenshields who was one of the pioneers of players coming over to Catalans, but Webb will really fill that spot well.

"He's been there for a long time under some good coaches and it was time for him to get the chance.

"He's been really good this pre-season and all the boys are keen to do well for him.

"David Waite's been good, for a young coach like Laurent to have him and Jerome around him and they bring different aspects. It's a good blend."

Frayssinous inherits a Dragons side that finished fourth in the regular season table last season, an improvement on the previous season's top six placing.

However, there have been changes, notably in the departures of Clint Greenshields - top scorer last term with an impressive 19 tries in 23 games, Setaimata Sa and David Ferriol, but in return Brent Webb, Zeb Taia and Olivier Elima have been signed as replacements.

From the outside, it would seem the pressure is on.

"It depends how we start, it's Laurent's first season, we've lost a few guys but the guys we've brought in are capable," Menzies said.

"I'm not feeling too much pressure, but there's expectation from the past couple of years that the team has built up.

"The boys have got to be proud of building those expectations for themselves."

Catalans are among the favourites for the top four, although the strength of the Super League has been highlighted by the off-season recruitment made by Hull FC, Leeds and St Helens.

"The competition gets better and better, and the playing field is getting more even every year," Menzies added.

"It doesn't matter where you came last year or where you are in the table, if you play well, you'll beat the other team more often than not - that's the way it's heading.

"Obviously there will be favourites but every game is a true contest and that's good for the game."