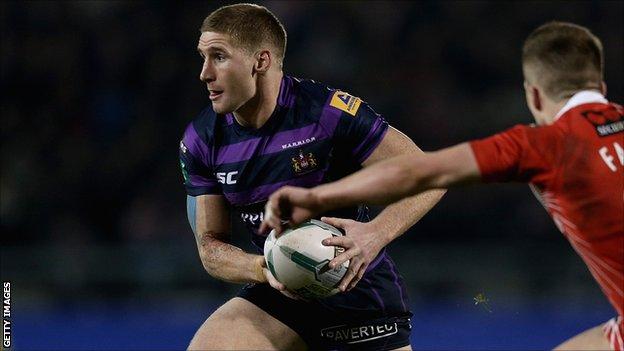 Salford were hoping to cap a promising week in which with a victory, but were well beaten.

Tomkins notched two more for the hat-trick to add to scores from Richards, Liam Farrell and Iain Thornley.

Ireland international Richards ended the evening with five goals, taking his personal tally to 14 for the season.

Head coach Phil Veivers admitted the squad was behind schedule in the build up to the game, although he was able to call upon signings Jack Murphy - on loan from Wigan - Rhys Williams and Ryan McGoldrick to bolster the squad.

However the visitors, shorn of the services of Thomas Leuluai, Jeff Lima, George Carmont and Brett Finch for 2013, fielded a new look half-back pairing of Matty Smith and Blake Green - and the duo showed their class to prompt a Wigan success.

The first try came within the quarter of an hour mark when Green, a winter arrival from Hull KR, slipped in Farrell who dummied before feeding Tomkins his first of the match.

Despite the prompting of French youngster Theo Fages with Ryan McGoldrick at half-back, Wigan scored again when Smith doubled the try scoring, and when Murphy spilled a kick soon after, last season's league top try scorer Charnley slipped in at the corner.

Warriors' Gil Dudson was sin-binned early in the second half for interference but Wigan were undeterred and added a fourth when Sam Powell's grubber kick was pounced upon by Thornley.

Richards, back in the groove after an injury-stalled 2012, burst through for his score and he soon turned provider when combining with Thornley to tee up Farrell.

Tomkins' late double was the icing on the cake, the first a solo effort from deep, the second profiting from bright work from Green.

"We didn't help ourselves throughout the game. In the first half we conceded two really poor tries. We came out in the second half and didn't get a lot of the ball.

"We were very poor with our skill levels, our execution of the skill and some decisions made defensively were poor. But I have always said we are probably three months behind every other club because we haven't had a pre-season.

"In that side were three bodies who haven't really trained with us. There might be some mitigating circumstances but at the end of the day you go on the field and you are able to make a tackle and pass a ball. That let us down tonight."

"I heard all those comments about us but I know we can play. That wasn't a complete performance - too many penalties and a little loose in contact. Once we fix that up we will be okay this year.

"It blew the cobwebs out. We had a few players a bit rusty but I'm happy with the performance.

"I knew it was going to be a test in the early period and all credit to them for sticking at it, but I thought we were quite good today. The front rowers were outstanding today. Sam is a great player and the work the middles (forwards) did was outstanding."