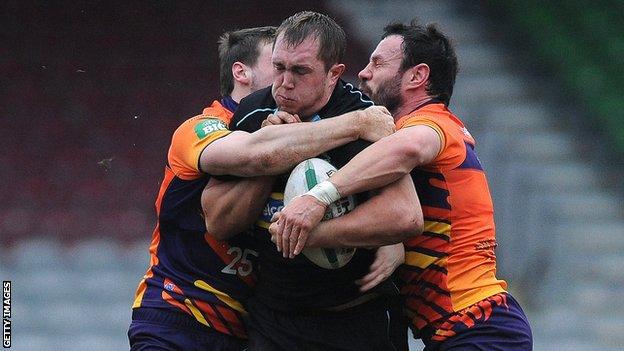 Widnes Vikings made a flying start to the Super League season, beating London Broncos in their opening fixture.

Widnes led 18-0 at the break with tries from Stefan Marsh, Jon Clarke and Dave Allen, all converted by Rhys Hanbury.

Kieran Dixon (2) and Chris Melling crossed for London, but further scores from Marsh and Frank Winterstein sealed the win for the visitors.

The Vikings were without Kevin Brown and Gareth Hock, their two high-profile winter arrivals, because of injury.

But Denis Betts's side survived a late rally to win away from home for only the second time since returning to Super League last season.

Away day glee for Widnes

Widnes Vikings won just one of their 13 away fixtures in Super League last season, beating Salford City Reds 46-8 in July

It was Widnes, the club that finished bottom of the table in 2012, who made by far the brighter start.

They were ahead inside five minutes when centre Marsh, who made his loan move from Wigan permanent during the off-season, muscled his way over the line after collecting a pass from skipper Clarke.

Clarke then got on the scoresheet himself, rounding off a neat move to extend the lead to 12-0, before Allen took advantage of a Broncos handling error to give Widnes a handsome advantage at half time.

Dixon reduced the errears on 64 minutes with an opportunist effort, and while Winterstein crossed to restore the Vikings' 18-point lead, tries from Melling and another from Dixon raised hopes of a late Broncos revival.

However, Marsh settled the game with a last-gasp score to give Widnes the perfect start to the campaign.

"There are a different set of expectations at the club now compared to last season. We want those expectations, but we have to learn to deal with them.

"We didn't deal with them today and I was surprised by the error count. We must not dwell too much on this result, as all this tells us is how we performed today.

"We have to take a look at the game, look for solutions to the problems and find those solutions fast."

"Defensively we were outstanding today and that was the big factor for us. We had to get through a lot of work and I was really pleased to see how hard the players worked for each other.

"That was really important for us as I did not think we did that well attacking-wise. But when we did create opportunities we took them.

"The key, though, was the attitude and that is something we are trying to breed among all the players at the club.

"We do have good players that are going to come back from injury, but everyone is fighting for their shirt at the moment and that is great to see."