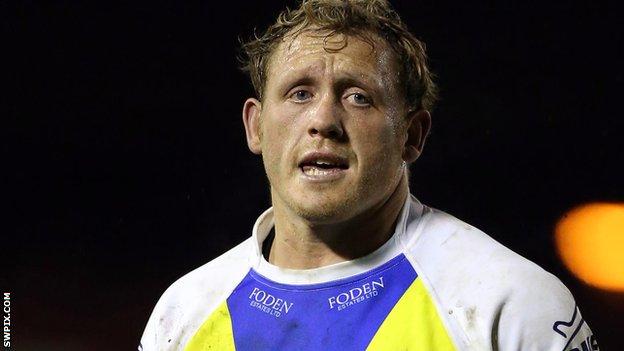 Title favourites Warrington Wolves eased to victory in their opening game of the season, running in seven tries in their victory against Castleford.

Chris Riley, Ryan Atkins and Ben Westwood were among six try scorers in a dominant first-half for the hosts.

Westwood crossed for his second after the break, while Richard Owen and Jake Webster grabbed late scores for Cas.

Following Challenge Cup success and a first Grand Final appearance in 2012, Tony Smith's side are strongly tipped to be challenging for silverware again this season.

And they got their campaign off to a flying start, scoring five tries in the opening 22 minutes.

I thought Cas had a real dig considering the scoreline was so heavily against them early on, they never gave in

Winger Riley started the first-half try-fest and centre Atkins finished off Simon Grix's break to make it 12-0 within four minutes at the Halliwell Jones Stadium.

England forward Westwood, who was outstanding in 2012 and narrowly missed out on being named Man of Steel to Wigan's Sam Tomkins, scored the first of his two tries after centre Evans and scrum-half Myler had pressed home Warrington's advantage.

But to their credit, Ian Millward's Tigers fought back.

Carney and skipper Shenton gave Castleford a feint hope of a comeback heading into the second period, although a Carvell score sandwiched in between gave Warrington a comfortable half-time cushion.

And Millward can take confidence from a second half in which his side scored two tries to the Wire's one.

On 43 minutes, Westwood crossed for his second try of the afternoon after good work from Myler, but Brett Hodgson's fifth conversion would prove to be Warrington's final points of the afternoon.

Tries from Owen and Webster, one of six debutants for Castleford, reduced the deficit and gave the scoreline a more respectable look, but the damage had already been done.

"We were probably a little bit scrappy with the ball at times but I thought our defence was was pretty good for a fair amount of the game.

"But we did some really good stuff as well today and, with the amount of penalties in the match and the amount of ball turned over, you are going to concede a few points.

"I thought Cas had a real dig considering the scoreline was so heavily against them early on, they never gave in.

"It was a good work out for us and we have a bit to work on, but we expected that with it being our first game of the year."

"We were up against a really talented squad who are worthy favourites for Super League and for us it was really foreign territory, with eight new faces, and to see where our young kids were.

"It was tough early on as we had only two completed sets in the first 15 minutes, so had no ball.

"At half-time I was quite positive and in the second half our enthusiasm, toughness and desire was great, but on a couple of occasions our execution was just off when we looked a little bit rusty.

"I thought if we could have got one or two tries we could have made it a great last 10 minutes and really been pushing for the game.

"We blew a couple of chances but I'm really proud of the players, because they could have easily been derailed into losing sight and structure."