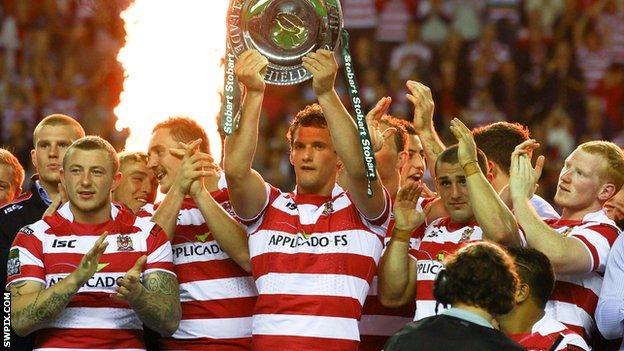 Wigan captain Sean O'Loughlin does not believe the Warriors lack experience heading into the new Super League season, which begins on Friday.

Experienced campaigners such as Thomas Leuluai, Jeff Lima, Brett Finch and George Carmont have all left the club.

Only two new faces - Hull KR duo and - have arrived.

"The younger lads put the pressure on themselves to step up, if they get the chance."

"We've made some good signings in Matty Smith [last July], Blake Green and Scott Taylor, and we've brought some good youngsters into the squad."

Players such as 22-year-old forwards Liam Farrell and Gil Dudson, and 21-year-old centre Jack Hughes, when the Warriors squad was decimated by injuries and suspensions.

But in 2013, those players will be expected to become more permanent fixtures in a team that has won at least one piece of silverware in each of the last three seasons.

In Wane's first season as head coach, Wigan had to be content with lifting the League Leaders' Shield, falling at the semi-final stage of both the and the

On both occasions, they lost in the last four to Leeds Rhinos, and Wigan-born loose forward O'Loughlin said those two near misses have given the squad an extra determination to achieve success this term.

Brian NobleBBC rugby league pundit and ex-Great Britain coach
It is a changing of the guard at Wigan on the quiet but they will be confident because of the strength of the squad and the crop of juniors. But I think there is a big question mark

"We were probably one of the form sides throughout the year but we didn't quite finish strong enough to be involved in a final," said the 30-year-old England international.

"There have been a few lessons learned from that and hopefully we can do a few things a little bit better this season and be involved in some finals.

"The spectators expect big things from us and winning some silverware in the last few years probably adds more expectation.

"The lads are really hungry to step up to the mark and do that, so fingers crossed, we can do that."

Wigan begin the new season at Salford on Friday and are likely to face one of their own youngsters, after