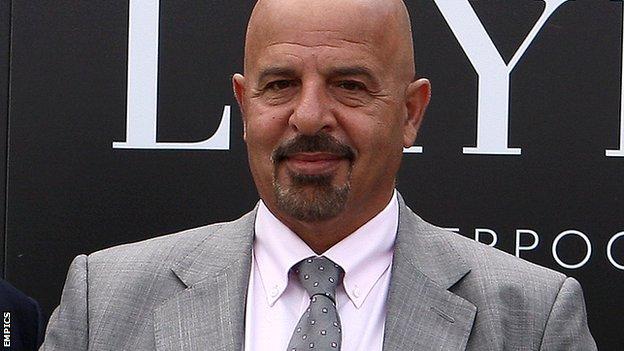 "Every coach has their own problems. I've just had some that are a bit more severe than others."

That is Phil Veivers' philosophical take on a turbulent few months for Salford, and the Reds' head coach can be forgiven for using a bit of gallows humour to lighten the mood.

After all, there were several times when it appeared very doubtful that the club would be in a position to start the Super League season.

But start it they will, and they get the 2013 campaign under way against Wigan Warriors on Friday with the prospect of a bright future ahead under their ambitious new owner.

Dr Marwan Koukash completed his takeover on Thursday, and suddenly a club crippled by financial problems are now being touted as one with the potential to become one of the biggest hitters in Super League.

The Kuwait-born, Liverpool-based businessman has already been a huge success in one sport - horse racing - and had two weeks before officially taking control of the Reds.

Marwan said it must have been horrific for the players. It is horrific when you don't know whether you've got a job or whether the next bill is going to be paid. It's frightening, but now it's looking positive

"Dr Koukash is a determined guy," says BBC Radio Manchester's Jack Dearden. "I just get the feeling he'll have a right go at it.

"Just look at his track record in horse racing. No one thought he would make much of an impact, but he has. He'll be equally determined to make the same kind of impact to Salford City Reds."

While the future promises much, it will be difficult for anyone involved with Salford City Reds to forget their annus horribilis.

Reports of impending financial doom were never far away throughout 2012, in what was the first year at their new £26m stadium in Barton.

Salford in October, but seeking payment of a tax bill worth almost £300,000, while two former Reds players - Luke Patten and Vinnie Anderson - claimed they were owed a total of around £70,000 in unpaid wages.

Salford City Council, who had already invested significant funds in the Reds, that would have resulted in them and Peel Holdings, the co-owners of the Salford City Stadium, loaning a combined £1.5m to the struggling Super League club.

With the winding-up hearing set for 7 January, and with the Rugby Football League was

was enough to - just enough time for the 54-year-old to secure the club's future.

Amid the chaotic backdrop, Salford's players and staff were left to prepare for the upcoming Super League season not knowing if they would even be taking part in the competition.

"I've got a good crew working around me. The job I've had has been to keep morale high and keep their chins up.

"Marwan said it must have been horrific for the players. It is horrific when you don't know whether you've got a job or whether the next bill is going to be paid. It's frightening, but now it's looking positive."

The picture was just as bleak and uncertain for Salford's players, as Stephen Wild explains.

"It's not just the players and the coaching staff, but it's everybody who works at the club and the stadium. Everybody could have been out of a job.

"We tried to do a pre-season at the same time as all that. Getting up early for training and getting flogged every day is quite tough, but we've stuck together as a team. You've got your team-mates to pull you through.

"We've all stuck together and hopefully that's brought us closer together for when it does get tough this year."

So what of 2013 and beyond? Can Salford City Reds become consistent challengers for major honours? And if so, how long will it take?

"We're looking to build a project over five or 10 years at Salford. Things aren't going to happen overnight," continues Wild.

"The potential's been there for years. It's good that someone wants to take it to the next level and wants to win trophies, but it's not going to happen straight away. We're not silly enough to think that."