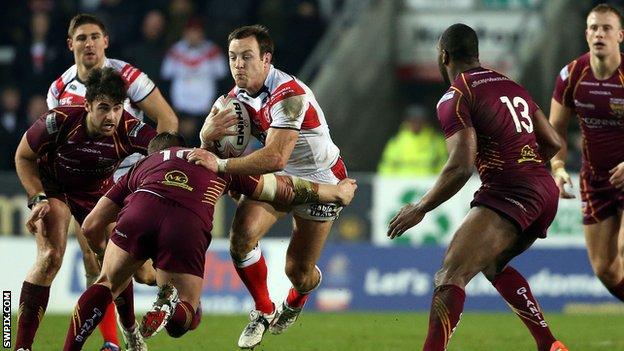 James Roby believes St Helens have been lifted by the endeavour and appetite shown by new signing Alex Walmsley.

Forward Walmsley, 21, and will be playing in Super League for the first time this season.

Hooker Roby told BBC North West Sport: "Alex is fresh, he wants it more than anything and it's having a positive impact on the rest of the lads.

Alex Walmsley collected Championship One's Young Player of the Year award in 2012, shortly after agreeing his move from Batley to St Helens

"He's come in from nowhere. The way he is training, he's pushing for a spot."

The England international continued: "I always believe that if you see others around you doing the positive thing, it will subconsciously rub off on yourself.

"People are going to have to up their game in order to match him. It can only be good for the team to have young, enthusiastic blokes.

"Alex was a bit of an unknown when we signed him and I'm sure a lot of people were wondering who this lad was.

"He's a raw talent and he's so hard-working. He's one of the hardest trainers I've seen and he's awful to tackle in training. I hope he does well when he gets his chance - he's capable of doing some damage."

New St Helens coach Nathan Brown has made two other additions to his squad during the off-season, with Hull FC duo Jordan Turner and Willie Manu also moving to Langtree Park.

"We're really looking forward to the season ahead. Last year, we were there or thereabouts. We got to semi-finals and stuff but we never got any silverware. A club like St Helens are expected to win silverware. We've had a good few years without any. We know what's expected of us as a team and we know we're capable of that."

Brown's reign at Saints begins on Saturday. Ironically, his first opponents will be Huddersfield Giants, the club

Roby said Brown has brought a freshness to the team, which will hopefully result in St Helens ending their recent trophy drought which stretches back to their Challenge Cup success of 2008.

"Every time you get a new coach, you're going to get slightly new ideas, different training methods and slightly different variations to the way you play," added the 27-year-old, who

"Nathan's been fantastic. He isn't trying to reinvent the wheel. He knows we're a team that's always there or thereabouts, he's just trying to bring in some subtle differences and trying to improve every player as an individual.

"Everybody's buying into everything he's brought in. It's freshened things up for a lot of people - for people like myself and Paul Wellens, who have been at St Helens for a number of years. It's nice to have these fresh ideas and different ways of training."