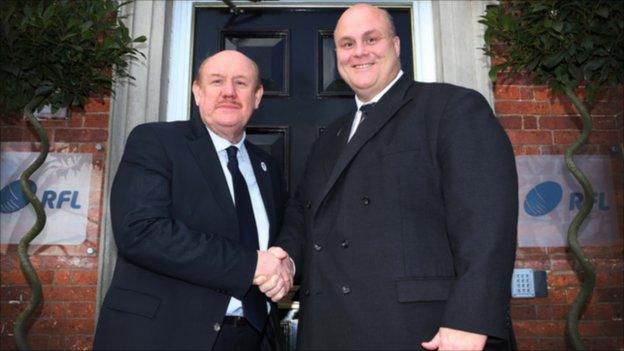 "I am absolutely delighted to accept the position as the new chairman of the RFL," Barwick said.

"Rugby league is a sport I have a genuine respect and affection for."

Meanwhile the appointment comes in an important year for the sport, with the 2013 Rugby League World Cup to be staged across venues in the European Super League and Championships this October.

Sponsorship is also a consideration for Barwick, who takes up his post on Friday, 1 February, with both Super League and the Championship due to kick off without title partners.

"I am determined to spread the word about what a great sport rugby league is, especially at this exciting time when we host the Rugby League World Cup in England and Wales," Barwick continued.

"The RFL is a widely respected governing body, with an exceptionally strong management team which has produced outstanding results over the last decade and I am very much looking forward to joining the board and working with my new colleagues to take this great game forward."

RFL chief executive Nigel Wood added: "I am delighted that we have been able to attract a sports administrator of Brian's calibre. His track record speaks for itself.

"Brian's considerable experience will help us take the game forward as rugby league prepares to embark on the most important year in its history with a competitive Super League, a new-look Championships and, of course, the Rugby League World Cup in England and Wales this autumn."