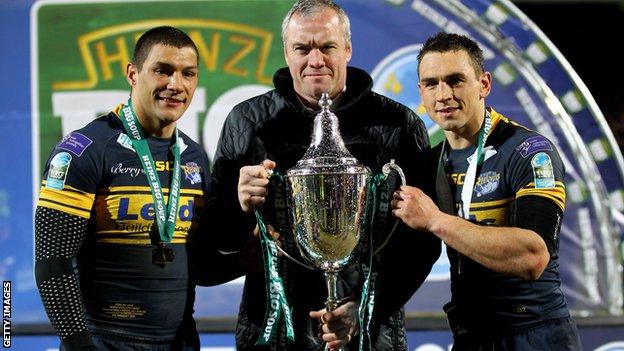 The 42-year-old agreed a three-year deal when he joined from Harlequins RL in October 2010.

He has been rewarded for guiding the club to back-to-back Grand Final wins and a World Club Challenge victory.

"We do put end-dates on most people, certainly players and coaches. We don't see the need to do that with Brian," said chief executive Gary Hetherington.

The Rhinos claim it is the first contract of its nature in sport as it has no end date.

According to BBC rugby league reporter George Riley, it effectively means McDermott cannot be sacked and if he parts company with the club, it would have to be by 'mutual consent'.

"However, the majority of coaches who leave clubs do so before the end of their contract, so in most cases the date is irrelevant. Hetherington is clearly keen to take the indecision element out of McDermott's position with this rolling deal as the club enters a period of transition," added Riley.

Hetherington said the head coach role was "a very demanding one" and the Rhinos wanted the best person in the role.

"In Brian McDermott, we have that man. This is recognition of Brian's ability, of what he's achieved so far and the diverse role he has within the club," he continued.

"He's not just involved in the first team, he's integral in a lot of what we do in rugby league at all levels across the city.

"He's proved himself to be integral to what we we're doing now and in the future. He's at the heart of our plans."

McDermott, who previously enjoyed a successful playing career with Bradford Bulls, said: "This is a very exciting time to be part of the Leeds Rhinos club.

"We have enjoyed a period of unparalleled success in the club's history with an extraordinary group of players.

"We will kick off the new season with a strong squad and looking to give our absolute best in every game to try and challenge for all the honours once again."

Since his arrival the Rhinos have reached every major final available to them, despite only finishing fifth in both Super League campaigns.

They open the 2013 season with a home match against Hull FC on Friday and take on Melbourne Storm in the World Club Challenge in three weeks.