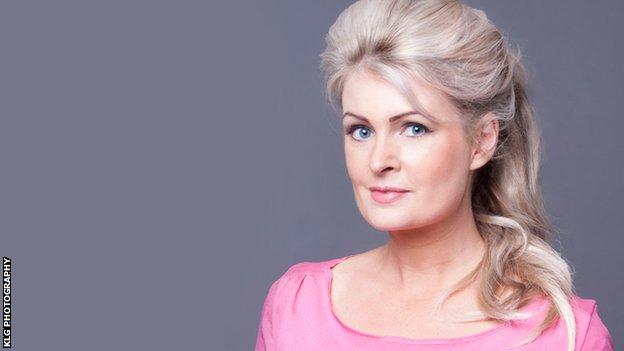 Award-winning business woman, founder of a charity, semi-professional singer, guest speaker, "mum of the year" to a three-year-old daughter - and now the only female director in the Super League.

Kate Hardcastle has achieved many things in her life but could she be the person to propel Bradford Bulls into the future?

A little under a year ago, the four-time Super League champions were on the brink of extinction and were forced to appeal to fans to raise £1m to keep the club afloat.

In June they went into administration and were hanging on to their future in the Super League.

A life-long fan, Hardcastle admits that she thought her team might cease to exist.

She says: "I rushed my daughter there last year, actually thinking 'my goodness me, I've got to take her because this genuinely might be it, this might be the end' - and that filled me with dread."

Hardcastle explains that she was first taken to Odsal as a two-year-old, by her father, Martin, and her grandfather.

"I was taken in at half time because it was free then so there was no concern that if I didn't enjoy it they would have wasted the money," she says.

And so her love affair with the club began - a love which has seen her step in to become a non-executive director on the board, alongside owner Omar Khan, who bought the club in August to secure its future.

She says her father will be keeping a close eye on the job she is doing.

"I have got a guy, with Bradford Bulls running through him, who will be sat with me at Sunday dinner poking me saying 'right what are you doing next? What are you going to do about this?'

"I get emails at three o clock in the morning from him. I'm like 'dad for goodness sake, we are going as fast as we can'."

Hardcastle, 36, was the lead singer in a successful band The Fabulous BB Kings, and still sings semi-professionally. She has her own company - "Insight with Passion" - which helps revive businesses and she has also set-up Charity Dreamgirls, which helps promote smaller charities across the UK. This woman of many talents has also recently been named Tesco Mum of the Year for 2013.

She explains her main roles at Bradford Bulls will include looking at the branding of the club, attracting more families and appealing to women to get involved in the sport.

She says: "I am trying to understand what the future of rugby league actually is and it's about inclusivity for me.

"We have a 40% female fan base, the biggest in the Super League, so I thought there was huge potential to understand how we could get more female fans, and make sure that the female fans we have are enjoying it.

"We want to make sure that all of the fans understand the brand and are getting excited about the brand again and that we were taking that message through to grassroots, because those are the children who are going to be the fans of the future."

A BBC Inside Out report in January revealed that Super League clubs are facing combined debts of £68.5m, and - like the Bulls - Salford City Reds were battling financial problems until they were bought out on the eve of the new season.

But is this a sport which can be saved?

She says: "It's only going to happen if it understands that the future is about evolution.

"It's got to understand that the future isn't just about doing what we've always done, and cross our fingers and tighten our belts a bit and it's going to be OK.

"And I think the Bradford Bulls are starting to show some indication and some signs that that's going to be the case."

She explains some of her ideas to bring about her vision of a real family day out to see the Bulls - something which she has seen is possible whilst working in Australia and attending cricket matches and rugby matches in the country.

She says the club will offer childcare facilities on match days so families with young children can still attend the game, she will look at food options ("not just Bovril and a pie") and she has already asked the fans about what merchandise they would like to see available.

On the subject of evolution, Hardcastle says that it is "crazy" that she is the only woman on a Super League board.

"Karren Brady is on the same speaking circuit as me, we both do seminars and speeches, and it was actually very different for her.

"I find the comparison quite challenging sometimes because she was brought in at a very young age to a football club, without having gone and proven herself as a business person and then went on to prove herself brilliantly. I have gone out and been a business woman and I'm being brought in to help a board with my expertise.

"So what the comparison basically is, is that we are business women in sport and that's really sad actually because that's about as far as it goes. I think that just proves there are not enough women in there and we've got to make a change there. "

She says: "If those teams are going to start to attract a different audience - and women are a fantastic audience to attract because they are not necessarily being appealed to through the other sports as well - then you need to understand women.

"You need that balance on the board.

"The right person has to do the job, regardless of sex, but if women never actually get the chance to get through, because something is deemed to be male dominated or a man's job, how are you going to be able to prove that you are the right person to do the job anyway?"

Although Hardcastle is not the first woman to grace a Super League boardroom - Kath Hetherington was chairperson of Hull FC for 12 years between 1999 and 2011 - she knows it will be a challenge.

"The fans have been very supportive in the main so far, as have the players and of course the board," she says.

"I imagine, if you go digging for it, there would be the odd comment on a forum or whatever about the fact that I'm a woman or the fact that I look a certain way - I don't know.

"No one is going to push me out of this sport.

"It's been my sport since I was two so I will be delivering on my job and when I feel I've succeeded at that job, and I've had the time to do that, then we can have a discussion about how I've got on."