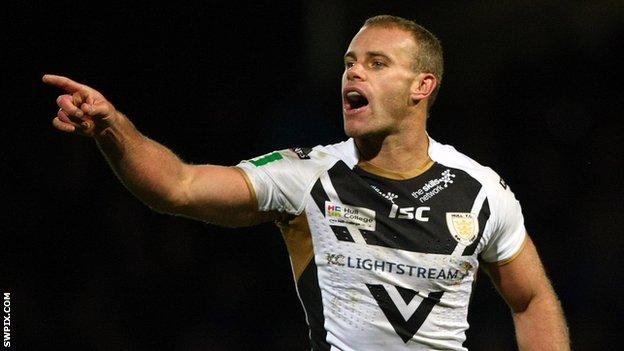 Daniel Holdsworth starred as Hull bounced back from their opening-day loss at Leeds by beating Bradford.

Hull winger Jason Crookes crossed first in the third minute against his old club and another try from Shannon McDonnell made it 12-0 at the break.

Tom Briscoe, Holdsworth, who was successful with four of his five conversion attempts, and Jay Pitts added further Hull scores.

Bradford touched down twice through Matty Blythe and Brett Kearney.

The game had been originally scheduled for Friday evening, only to then be postponed due to traffic problems on the M62.

Peter Gentle's side produced a clinical performance in the rearranged fixture, showing why some are tipping them as dark horses for honours in 2013.

"We were solid for long periods and we soaked up a lot of pressure. To have kept them to nil at half-time was very impressive.

"But the tries we let in were soft in the context of the game, we needed to put it to bed. We need to keep our foot on team's throats.

"We have to learn. We are learning some tough lessons.

"We have to earn the right to play some football. We've been doing some special things in training but in games we're pushing things that aren't quite there."

"It was not the result I wanted. The lads worked hard but we got dominated early on and allowed Hull to play the way they have trained.

"We didn't always make the right decisions but I am happy with how we came back.

"Hull defended well but we have to take the positives, which were we looked dangerous at times."