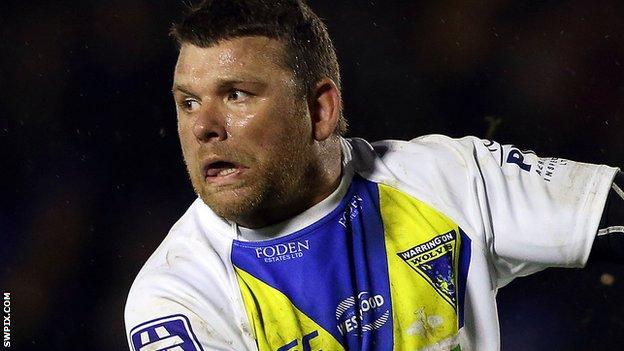 Wigan and Warrington were involved in the first draw of the 2013 Super League season at the DW Stadium.

Two Joel Monaghan tries cancelled out Wigan scores by Josh Charnley and Ben Flower, but a Pat Richards penalty gave the hosts a 12-10 lead at the break.

A superb solo effort from Richie Myler put the visitors back in front, only for Liam Farrell to restore parity.

Matty Smith's drop goal put Wigan a point ahead, before Lee Briers levelled with a drop goal of his own.

Wigan and Warrington had finished first and second respectively in Super League last season and Friday's encounter was the first to pit two of the heavyweight sides against each other in 2013.

After the home side were penalised for a knock-on, Michael Monaghan combined with Briers to send younger brother Joel in at the corner for the game's opening score on 10 minutes.

But Wigan were soon on the scoreboard themselves when Charnley, Super League's top try scorer in 2012, profited by some neat handling by centre Darrell Goulding to touch down in identical fashion to Monaghan.

Although Richards failed to convert, the Warriors were soon in front when a smart offload from skipper Sean O'Loughlin found a way to Farrell, who sent in Flower near the posts.

But back came Warrington through Monaghan's second try.

Under pressure from Ryan Atkins, Charnley failed to gather a high Briers kick. Chris Riley picked up the loose ball and set the Wire on a break that created an overlap for Monaghan to cruise over from close range on the right touchline.

That levelled the score at 10-10, but Wigan would have the cushion of a half-time lead when Garreth Carvell was penalised for a high tackle, giving Richards an easy kick in front of the posts.

A moment of real quality from Myler lit up the second half to put Warrington back in front, the scrum-half breaking through three tackles to race in from 20 metres, although Wigan hit back almost immediately when Farrell easily finished off a neat move.

As the clock ticked down, an uncharacteristic mistake from Warrington full-back Hodgson let Wigan in.

Smith dropped a goal from 20 metres to put the Warriors a point ahead and on course for their first league win over Warrington since February 2010.

But Briers had other ideas, the former Wales international keeping his nerve to force a draw and ensure the north-west neighbours would share the spoils.

"It was a good effort from our players. To have to defend so many sets on our line, we showed some great character.

"I'm a little frustrated because I thought we could have done better but the courage and guts we showed in our defence was outstanding.

"We were nowhere near our best - we put ourselves under pressure with the penalty count - but overall I'm fairly pleased with that.

"It was a really big game and in the past we've not been performing in big games. It will send a signal out to other teams. The pleasing thing for me is that it's a quiet dressing room. They're all disappointed with the result."

"There's such long way to go - I'm not going to go home and kick the dog.

"There are mixed emotions. We're not punching the air but it was pleasing that we found a way not to lose it once we went behind.

"I don't think we controlled the game as much as we needed to. They were better than us in the first half. They out-enthused us but, in the second half, we showed a bit more control for patches of the game.

"The skill level was not particularly high but it was tense and the crowd played a part in that."