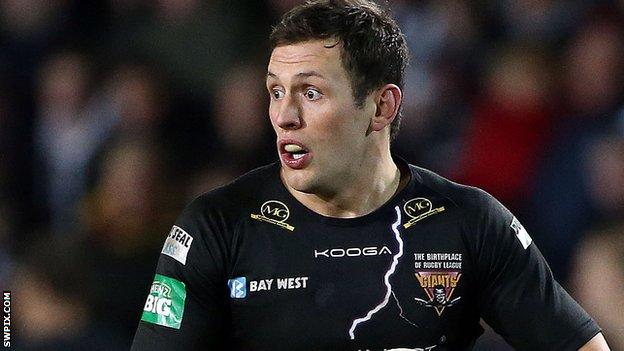 In the first half Lunt and Eorl Crabtree crossed for the Giants, who hammered St Helens in round one, while Shane Rodney replied for the Broncos.

Another try from Lunt, plus further scores from Craig Kopczak, Brett Ferres and Joe Wardle made the game safe.

And Danny Brough was impressive with the boot, kicking five goals.

Huddersfield are one of only two sides - Catalan Dragons being the other - to win their first two matches of 2013.

London, meanwhile, have lost their opening two fixtures and look set for another season of struggles.

The Giants were able to give a debut to Tonga international Ukuma Ta'ai and took control of the match in the second period after a cagey first 40 minutes.

"We were just about or slightly below average and, frankly, some of our play was pathetic.

"The way this team is set up is to be direct. But for long periods we decided to play the touchline, not the try line.

"We've got a group of disappointed people in the dressing room after a 34-6 win, which shows where we're at."

"It was untidy. There were too many errors and it took a lot of energy out of us.

"We need to be more careful with our decision-making.

"The lads out there were more than capable of doing their jobs. And I liked how we were as a team. There were positive signs."