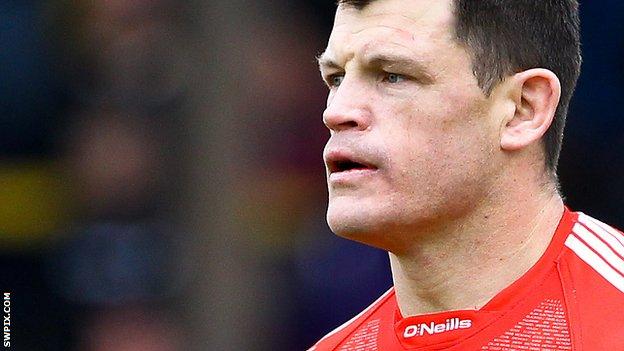 St Helens edged a feisty derby against Widnes, which was marred by a red card shown to Vikings forward Ben Cross.

Stefan Marsh struck first for the hosts before Francis Meli levelled in a closely fought first hour of the match.

A high tackle on Saints skipper Paul Wellens sparked a mass brawl, after which Cross was send off and team-mate Jon Clarke sin-binned.

And the visitors made the most of their two-man advantage, Lee Gaskell and Meli crossing to give Saints a first win.

St Helens, despite being without the injured James Roby, maintained their record of having never lost to Widnes in Super League, but the result was in the balance until Cross's dismissal.

With the home team reduced to 11 men, Nathan Brown's side, who were demolished by Huddersfield in their first match of the campaign, crossed twice in the closing stages.

Widnes gave a debut to Gareth Hock, who had shoulder surgery before completing his loan move from Wigan Warriors.

"I thought there were two good teams out there and I thought we had a chance of winning the game.

"It was one of those tough days to be really skilful but I thought we had the better opportunities.

"It was only when we were down to 11 men that they really got some opportunities to score tries and they did.

"There were plenty of other people who got involved [in the brawl]. If the referee was going to get the cards out, which he obviously wanted to, it should have been 11 against 11.

"He's a really good referee but sometimes you have a bad one and I thought today he was poor at times."

"It's good to get a win. I was happy with our effort and our defence. Our defence was far far better than last week.

"I thought the opposition ripped in. They played really well and, if we had the same commitment as last week, we would have got beat, without a shadow of doubt.

"James Roby could have played at a push but it wasn't worth risking him.

"We lost Josh Perry early and then Jonny Lomax and Lance Hohaia during the game.

"We had to move people around but those things happen and, when your effort and commitment are good, you give yourself a chance."