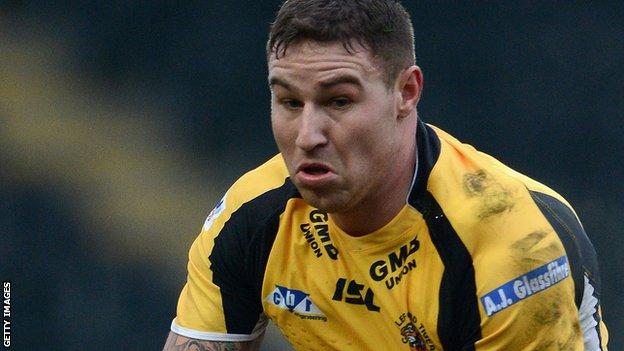 Half-back Rangi Chase was in top form for the hosts, who took a 10-6 lead into the interval with tries from Jordan Tansey and Jake Webster.

Danny McGuire had kept the Rhinos within touching distance of the Tigers.

Ryan Hall's second-half score looked to have seen Leeds home, before Ellis kept his nerve with two late kicks to complete a famous victory for Cas.

Castleford claimed their first win over their Yorkshire neighbours since February 2010 in a gripping local derby.

And they were inspired by England international Chase, who appears to be back to his best after following up a sensational 2011 season with a forgettable 2012.

He was the creator of both Castleford tries, firstly kicking through for full-back Tansey to finish and then sending centre Webster clear to put the home side in front for a second time.

Leeds skipper Kevin Sinfield was reliable as ever with the boot, converting both Leeds scores, and when Hall crossed while Castleford's Nathan Massey was in the sin-bin, it looked as though Brian McDermott's men would maintain their unbeaten start to 2013.

But Ellis had other ideas, and when the visitors were pulled up twice by referee Tim Roby in the final 10 minutes, he kept his cool to nail two successful kicks and seal the win.

"I am really happy for the players. They have worked really hard and the new guys that have come in have been really good.

"I thought it was a real shot in the arm for the effort the players have put in.

"I felt it could have been a lot closer last week in our defeat at Warrington but I was really impressed that we had a bit of backbone about us that we didn't have last year."

"Well done to Castleford. Both teams put in a really big effort.

"I haven't really got too much negative to say about us but I think I will be showing the players tomorrow in terms of what we need to do better.

"I think the game came down to some unfortunate errors.

"I don't think in general Castleford handled the conditions better than us - it was just unfortunate mistakes towards the back end that cost us."