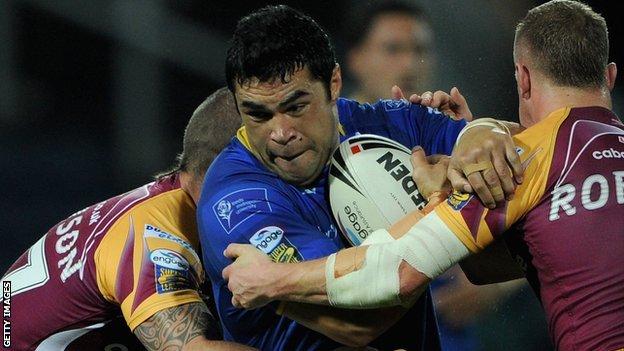 Plans for Leeds Rhinos forward Kylie Leuluai to play for Hunslet Hawks this weekend have been blocked by the UK Border Agency.

The 34-year-old New Zealander had been due to turn out on loan for the Hawks to improve his match fitness.

However the Rugby Football League said the UKBA had informed them dual registration was not possible under the terms of his visa.

An RFL spokesman said dialogue with the UKBA would continue.

A number of older Leeds players have been dual-registered with the Hawks, who play in the Championship, a level down from Super League, in a bid to give them match time. This is because as from this year the Super League Academy structure is exclusively for players under the age of 19.

In a statement, an RFL spokesman said: "The UKBA have confirmed that until any change in circumstance is agreed, under existing provisions no player on a Tier 2 visa can be dual registered."

Meanwhile the Rhinos match against Warrington Wolves on Saturday, April 6 has been moved to Sunday April 7, with a 18:45 BST kick-off.